Is there no end to the vile rumours that the English Defence leadership is prepared to spread in order to incite hatred against Muslims?

In recent months a succession of lying Islamophobic accusations have been publicised by the EDL via Facebook and Twitter. In May, EDL co-leaders Stephen Lennon and Kevin Carroll claimed that a 7-year-old girl had been gang-raped in school toilets by Muslims. Later that month, in the highly-charged atmosphere following the killing of Lee Rigby, the EDL whipped their followers up into a frenzy by claiming that Muslims in Oldham had publicly celebrated the murder. Last month the EDL found another rumour to circulate, with Lennon accusing Muslims of having launched a “violent attack on innocent English boys and girls” in Ashton-Under-Lyne. Needless to say, all of these claims turned out to be false.

Yesterday Lennon was at it again, accusing the Barnsley Chronicle of covering up the fact that a recent assault on a serving soldier was carried out by Muslims – an allegation for which he offered no evidence at all. The Chronicle tweeted back that the victim’s mother had made clear that this was not the case. 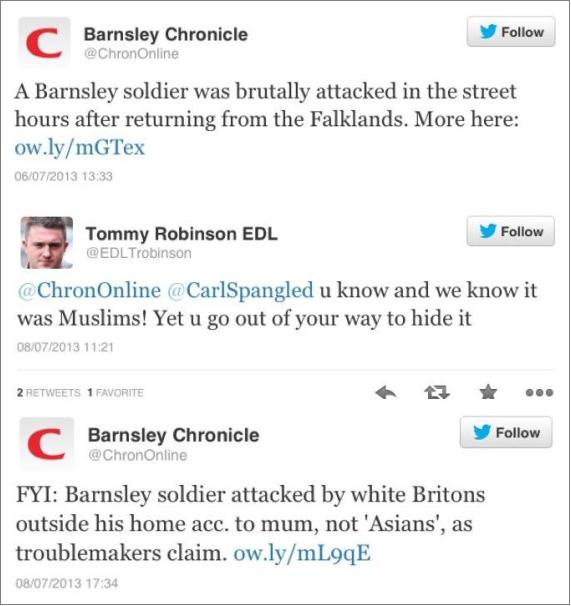 Indeed, the following postscript has been added to the Barnsley Chronicle report: “The mother of the soldier has asked it be made clear the attackers were white British men.”

Not that this will stop the EDL leadership from spreading similar lying rumours in future. Nor will it prevent the membership from believing them. All Lennon and Carroll are interested in is provoking violent hysteria among their followers, with a cynical disregard for the facts, while the ignorant bigotry of the EDL rank and file is so ingrained that they will blindly accept any bullshit from their leadership as long as it reinforces their hatred of Muslims.