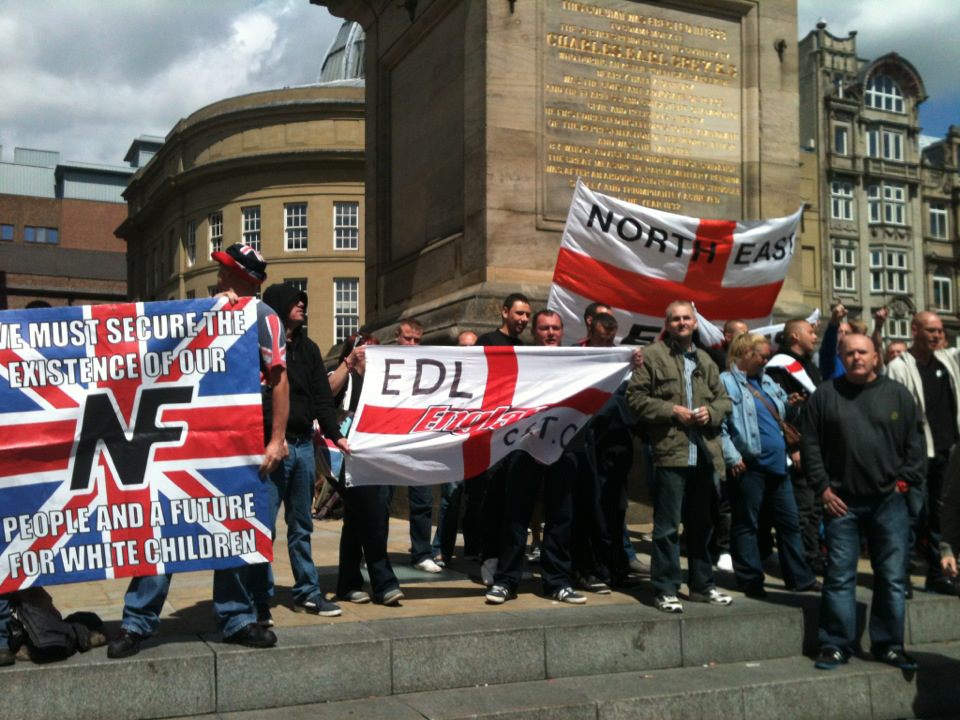 The head of the English Defence League leader Stephen Lennon was interviewed by Andrew Neil on the BBC’s Sunday Politics show earlier today. The Daily Telegraph reports that Lennon dismissed images of EDL supporters giving Nazi salutes as a “manipulated photo”. He told Neil: “I am not a Nazi, I hate Nazis, I hate fascism.”

If Robinson/Lennon is as vehemently opposed to Nazis as he claims, it’s odd that he raises no objections to the EDL engaging in joint activities with them – as shown in the picture above, which is from last September when the North East EDL joined the National Front and other neo-Nazis in organising a violent attack on a peaceful counter-Jubilee party in Newcastle.

As for Lennon’s professed hatred of fascism, it’s worth recalling that the EDL’s North East regional organiser is the fascist thug Alan Spence, a former British National Party parliamentary candidate who was given a 7-month prison sentence in 2011 for his part in an attack on a left-wing meeting. During the EDL demonstration in Newcastle last month, Spence was heard interrupting Lennon’s speech with the shout “send the black cunts home”, to loud applause from the ranks of the EDL.

And if Lennon is looking for evidence of fascist sympathies within the EDL, he can find it even closer to home. Hel Gower is an open admirer of both the BNP and the neo-Nazi group the British First Party, and she has publicly expressed her support for unity between the EDL and BNP. You’d have thought the EDL leader would be aware of that. Gower is, after all, his PA.