A schools tour by the founder of the English Defence League has been scrapped.

Stephen Yaxley-Lennon had hoped to reinvent himself by preaching tolerance after he quit the far-right group. He planned to launch his tour tomorrow but the head of the first school he was due to speak at has told the convicted fraudster not to turn up. Mums and dads at The Duchess’s Community High School in Alnwick, Northumberland went on social media to warn that Yaxley-Lennon is no role model.

He was once convicted of headbutting one of his own EDL supporters.

Now Yaxley-Lennon, better known as Tommy Robinson, has abandoned his tour. He says he will now post a video online daring any head teacher to allow him into their school. But the only confirmed date in his diary is on Thursday when he will attend court to be sentenced for a mortgage fraud he has already admitted.

But then, it’s hardly surprising that Lennon should sympathise with the outraged parent, given his own previously expressed views: 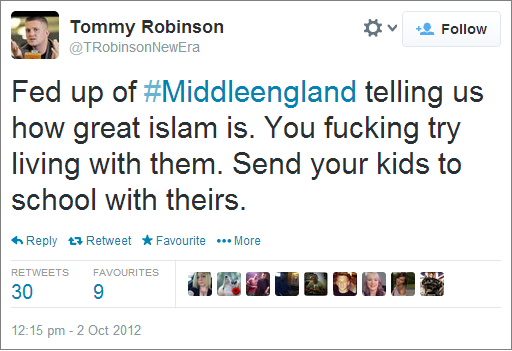