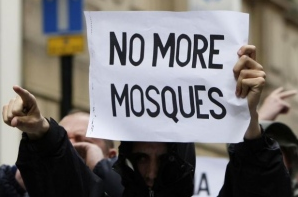 The English Defence League last night claimed it had been swamped with messages of support from all races. And the masked men also said followers of Islam had contacted the EDL after the group produced a video proclaiming it is “anti-fascist”.

Yesterday the Daily Star revealed exclusive photos of the group’s swastika-burning video, which was its response to critics who say the organisation’s true motives can be compared to the Nazis.

The EDL said its campaign is only against hate-preaching fanatics, terrorists and Sharia Law. It says it has wrongly been linked with the far-right and BNP and only calls for integration. It said moderate Muslims were welcome in the country.