English Defence League (EDL) supporters are calling for a national demonstration in Cambridge after Muslims objected to student accommodation being built near a planned mosque. The call for a march or rally in the city comes after Muslims slammed proposals for more than 300 student flats in Mill Road – saying they instead want homes for families.

One supporter of the Cambridge branch posted on their Facebook page: “We do not want a super mosque in Cambridge. They are now demanding that students can’t live  next to the new mosque, what’s next shut down Mill Road? Enough is enough. EDL please demo in Cambridge. We need you.”

Graham Clark was among others supporting the call. He wrote: “I agree. We should make Cambridge next national demo. We go where needed so put it to an RO (Regional Officer) and I will be there with my boys.” Perry Andrews wrote: “We’ll be there to support as well. Deffo speak to your local RO get them to get it out there.”

But Cambridge Unite Against Fascism, which held two counter demonstrations at the last EDL march and rally in the city, have vowed to do the same again.

A spokesman said: “The EDL returning to Cambridge is almost laughable. Last time they came they embarrassed themselves. They were humiliated, massively outnumbered about 20-1, penned drunkenly in a cage for their own protection. Still half of them didn’t dare emerge from the pub where they were cowering. The magnificent 1,000-plus counter protest showed the true face of Cambridge – diverse and united. If they do return we will of course do the same again.”

Cambridge News omits to mention that it was its own report, headlined “We don’t want 330 students next door in Mill Road, says Cambridge mosque”, which was largely responsible for provoking the EDL’s angry response. 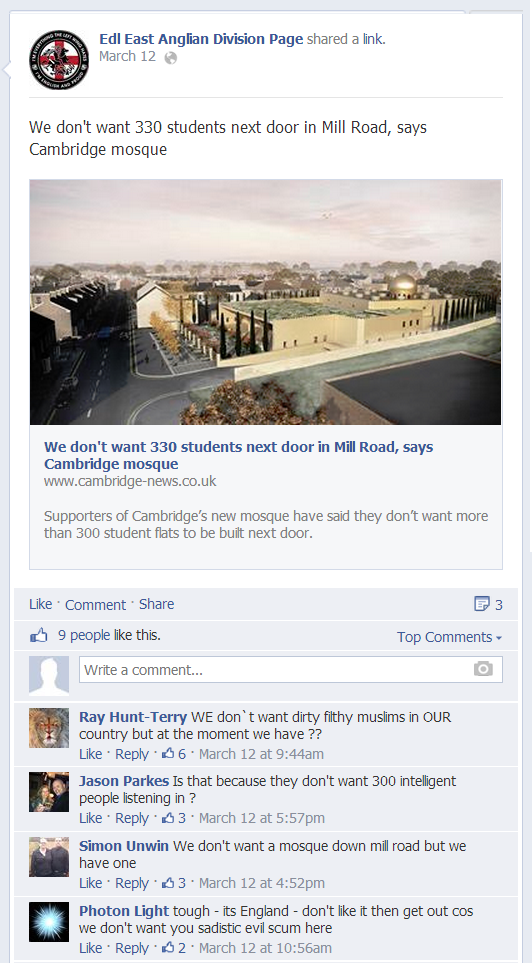