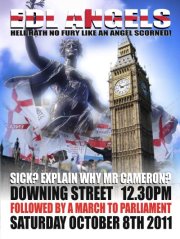 This Saturday the English Defence League will be holding a demonstration in Downing Street to protest against David Cameron’s attack on the EDL in the House of Commons last month, when he observed that he had described some sections of society as sick and added that “there is none sicker than the EDL”.

In an evident attempt to soften the EDL’s public image as a mob of violent Nazi-saluting racists, Saturday’s protest has been organised by the women’s section, known as Angels, who have been collecting signatures for an online petition headed “EDL Angels are not sick” that they will be handing in at Downing Street. As we have pointed out previously, the flaw in using the EDL’s women members to front the campaign is that the Angels themselves have a well-established record of violence, racism and fascist sympathies.

And now EDL News has published screenshots of revolting Facebook comments by a Bristol EDL member named Amy Andrews. She posted them in response to Tariq Jahan receiving the Daily Mirror‘s Pride of Britain award, in recognition of his moving appeal for peace after the death of his son during the riots in Birmingham. Outraged that a Muslim should be the recipient of such an award, Andrews commented “pride of BRITAIN not pride of fukin MUZZIE LAND fuking cunts”, followed by “dont even fukin tell me that coz this fukizies son got killed n he gave some piss ass speach he gettin a fukin pride of britain award”. Another EDL member chimed in with “shame they didnt stab that cunt or he wldnt ave been there”.

In his speech at their demonstration in Telford in August the EDL’s co-leader Kevin Carroll made a point of paying tribute to Tariq Jahan, in what was clearly an opportunist attempt to cover up the vile and often violent anti-Muslim hatred which pervades the movement that Carroll heads. Unfortunately for the EDL leadership, their pitch for respectability is continually undermined by the actions of their own rank and file, who cannot restrain themselves from expressing their vicious racism towards the Muslim community.

Unite Against Fascism is organising a counter-demonstration against the EDL’s protest on Saturday. Details here.