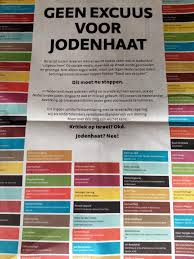 A Dutch Jewish group dropped the politician Geert Wilders from a petition against anti-Semitism.

The Center for Information and Documentation on Israel, or CIDI, had approached Wilders for his signature along with other well-known Dutchmen. But the group dropped Wilders’ name when the petition appeared on Thursday as a full-page ad in De Telegraaf daily.

“In the Netherlands, everyone must live safely, also Jews,” read the petition. The petition noted that it was not an “expression of solidarity with Israel’s government.” Rather, the 86 signatories said: “Criticism of Israel? Okay. Jew-hatred? No way.”

CIDI director Esther Voet told the Volkskrant daily that Wilders, the leader of the far-right Party for Freedom, was removed after he criticized a joint declaration earlier this week by Jewish community representatives and Dutch Prime Minister Mark Rutte.

In an open letter this week, Wilders accused Rutte of ignoring “the elephant in the room,” adding: “You fear Islam so you will not say what everybody knows: The more Islam grows in the Netherlands, the more anti-Semitism grows.”

Released amid an elevated level of anti-Semitic incidents coinciding with Israel’s actions in Gaza, the Aug. 4 declaration read: “Conflict occurring elsewhere must not lead to tension and conflicts between various groups in the Dutch society.”

The statement did not mention Israel, but it did praise a Muslim group’s call for tolerance.

CIDI wrote in a statement that Wilders’ name was removed because his letter “did exactly what concerns the people who made the declaration, namely importing the Middle East conflict” to Holland.

Voet also told Dutch media that 70 percent of anti-Semitic incidents were caused by immigrants, though she did not know their religion.

Wilders lived in Israel for two years and is a staunch supporter of the Jewish state. He is also outspoken in his opposition to Islam and recently caused controversy when he suggested Holland should have “fewer Moroccans.”

Federative Jewish Netherlands, a small right-wing Jewish group, criticized CIDI’s actions and called on it to apologize to Wilders, whom it thanked for his efforts on behalf of Israel and Dutch Jewry.