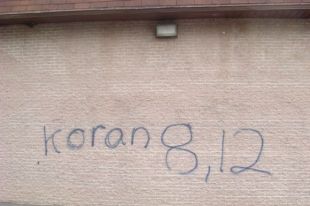 A small mosque in a quiet, residential neighbourhood in Dorval has fallen victim to a third graffiti vandalism attack in the space of 11 months, with no suspects retained after the first two incidents. “”This person is not a graffiti artist. This person is trying to give a message,” said Dorval Mosque’s president Mehmet Deger, alluding to the nature of the scrawls left each time on one of the mosque’s walls.

In this instance, the words “Koran 8,12” appear in blue on the wall facing the parking lot. As in the past two writings left in June 2008 and this last February, respectively, the reference is to a verse in the Muslim holy book that could be taken to mean it encourages the murder of infidels or non-believers. “We still would like to talk to these people,” said Deger, repeating his call for the perpetrators to come forward. “I don’t know whether they are a group of people,” he added. “But they are giving a message. And it looks like they are a bit brain-washed.”

The writing appears to be lower on the surface of the wall than in the two previous cases, which leads Deger to believe a child, or children, were used. “If they educate children this way, it’s no good,” he said.

The wall in question is adorned with a single video camera, but, covered as it was with spider webs, Deger said it is unlikely to do much good. “There is a moment there (on the tape) but you cannot see clearly,” he said.

The incident must have happened overnight between May 17 and 18, Deger said, since he was there at the mosque until 11:30 p.m. on the 17th, and only discovered the graffiti on the morning of the 18th.

A police report was made, but an investigation may not go too far, according to Station 5 community relations officer Liliana Belluci. “I know a police officer was there and he gave (the mosque) some security tips,” she explained. When informed the camera’s footage is unclear though, she said it could be difficult to pursue the investigation.

Reached today over telephone, the Canada Council on American-Islamic Relations’ executive president seemed unaware of the latest attack. “If it has been vandalized again, I can tell you our statement still stands,” said Ihsaan Gardee. “We would call again for the authorities to investigate this as a matter of urgency.”

Meanwhile, the mosque is scheduled to receive a visit by federal Citizenship, Immigration and Multiculturalism Minister Jason Kenney, who is currently on a trip to the Middle East. “Our office initially heard about the vandalism acts in the paper and then followed up with the mosque and they informed us of the situation,” explained Kenney’s press secretary Julie Carmichael.

The visit is scheduled for May 29.