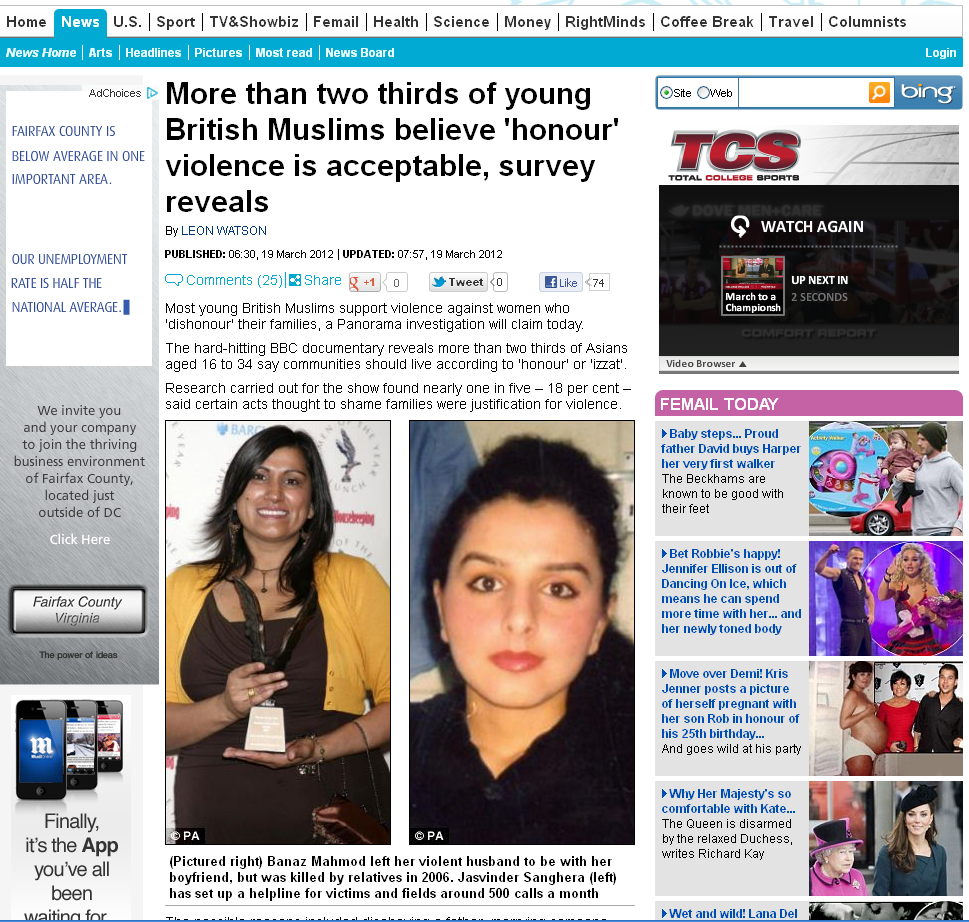 Here is a classic piece of Islamophobic reporting by the Daily Mail, featuring the paper’s usual contempt for factual accuracy when it comes to coverage of the Muslim community.

In reality the Panorama documentary Britain’s Crimes of Honour does nothing of the sort. The ComRes poll commissioned by Panorama, to which the Mail‘s scaremongering headline refers, found that 69% of respondents agreed with the proposition that “Families should live according to the concept of ‘honour’, or ‘Izzat'”. That particular question made no reference at all to violence. Furthermore, the poll was conducted among British Asians of various faith communities. 70% of Muslim respondents said they agreed with living according to the concept of honour, but so did 79% of Sikhs, 64% of Hindus and 62% of Christians.

What the Panorama documentary claims, based on the ComRes survey, is that 18% of young British Asians believe that some forms of behaviour by women which could affect their family’s honour justify physical punishment. And even that figure is based on a one-sided reading of ambiguous findings.

In fact only 6% of respondents agreed with the proposition that “In certain circumstances, it can be right to physically punish a female member of the family if she brings dishonour to her family or community”. The figure was also 6% for respondents aged 16-24 and 7% for those aged 25-34. There were more Christians (8%) who agreed with this proposition than Muslims (6%).

The 18% figure was arrived at by presenting respondents with a number of possible “offences” by young women (disobeying their father, marrying someone unacceptable to the family or community etc) and then asking which of these actions respondents thought were “reasonable justifications for physical punishment”. 18% of British Asians in the 16-34 age bracket said they thought one or more of these actions could be regarded as “reasonable justifications”, three times more than those who thought it was “right” to carry out physical punishments.

Neither ComRes nor Panorama saw fit to try and explain this anomaly, preferring instead to emphasise the higher and discount the lower figure. An obvious explanation for the disparity, however, is that respondents might think that their family or community could regard certain actions as reasonable justifications for physical punishment while disapproving of such punishments themselves. Which puts a rather different complexion on it.

What seems to have happened here is that the Panorama documentary makers set out by assuming that support for “honour” based violence is rife within British Asian communities but found that the ComRes survey provided little support for this assumption. So the poll findings were not interpreted objectively but rather hyped up to suggest that there is solid evidence of widespread support for such violence.

As for the Daily Mail, it couldn’t even restrict itself to publicising Panorama’s dubious claims but had to invent its own.