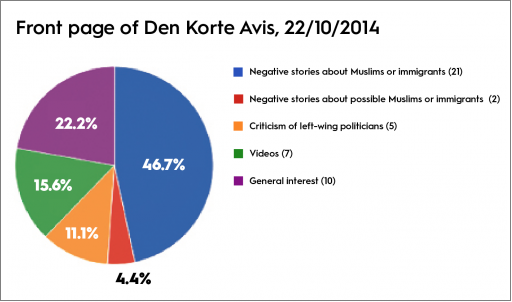 The Danish online newspaper Den Korte Avis (DKA) has gained a substantial readership since its launch in January 2012. It has also attracted sharp criticism for the right-wing, anti-migrant line promoted by its owners and editors Karen Jespersen and Ralf Pittelkow.

The English-language Danish monthly The Murmur has published a revealing analysis by Elías Thórsson of the content of DKA’s so-called journalism. The Murmur surveyed of all the articles on DKA’s website on a random day (22 October), and placed them according to subject matter in one of five categories. The findings, summarised in the above pie chart, are extremely disturbing. Thórsson writes:

There were 45 stories on the website when we made our survey. 21 were negative stories about Muslims or immigrants, with topics ranging from Muslim gang members in Denmark to a woman in France who was thrown out of the opera for unwittingly breaking the country’s niqab ban. Ten stories were general interest, and five were critiques of left-wing politicians. Of the seven video articles, three were negative stories about Muslims or immigrants. The two remaining articles insinuated that Muslims or immigrants were responsible for criminal acts by specifying that the criminal acts took place in neighbourhoods with large immigrant populations.

In total, 26 of the 45 articles (58 percent) either directly or indirectly cast a negative light on Muslims and immigrants in Denmark.

Thórsson points out that DKA’s lack of reliable sourcing is a major failing for a self-styled newspaper. Only two of the articles surveyed used original sources, while the rest borrowed all their source material from other media organisations. An article from 20 October even cited the Canadian “counter-jihad” blog Blazing Cat Fur as a source. Thórsson concludes:

The question then remains whether DKA can continue to call itself a news site. On Facebook, it states that its mission is to collect “the most important information about society” and analyse it before presenting it in easy-to-read articles. “You could call it news with an explanation,” it claims. The evidence, however, suggests that it is a blog driven by an anti-immigration agenda.