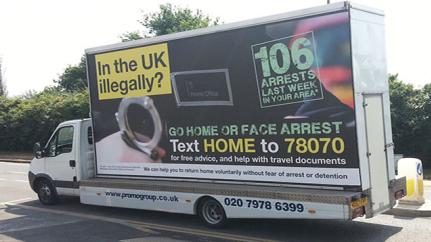 The Government’s “go home” vans have been blamed for a racist attack on a Northamptonshire mosque by a local MP.

Labour MP for Corby Andy Sawford said he was “appalled” to see a mosque was targeted shortly after the Home Office’s controversial vans toured the country.

He said during an urgent question on border controls: “When I visited a week after the Home Office’s racist go home vans had been touring English cities – (at) the mosque in Corby I was appalled to find the words in very large letters ‘go home’ outside the mosque.”

Mr Sawford suggested the culprits were motivated by the vehicles. “That act was the act of a tiny minority of the people in my community spurred on by this Government’s racist attack on the people of this country,” he said.