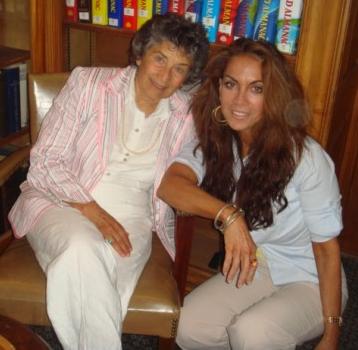 The Jewish Chronicle has published a report on conflicts that arose during a one-day symposium sponsored by the Journal for the Study of Antisemitism which was held at the Wiener Library in London last weekend.

The controversy was prompted by contributions from two of the speakers. One was Bat Ye’or (the pen name of Gisèle Littman) who informed her audience that the Organisation of Islamic Cooperation is “the source of antisemitism” and that “Islam is denying the root of Judaism and Christianity with a profound belief in Jihad”. Another speaker, Manfred Gerstenfeld, asserted that Muslim culture is inferior to Western culture.

David Hirsh, editor of the pro-Israel, anti-boycott website Engage, was so outraged that he even “left the room during Dr Gerstenfeld’s lecture”. Hirsh told the JC that he was “appalled” by Gerstenfeld’s views. Other participants who reportedly walked out were David Feldman, director of the Pears Institute, and Philip Spencer, director of research in politics at Kingston University.

Dave Rich of the Community Security Trust, who was also a speaker at the event, went so far as to offer the penetrating insight that Gisèle Littman’s remarks “could be construed as Islamophobic”. Another leading figure in the CST, Mark Gardner, stated at the conclusion of the seminar that “a minority of speakers said things about Britain, Europe and Muslims that we found to be incorrect, unacceptable and self-defeating”, adding that “we made our concerns clear with a number of interventions”. There is no indication that the CST representatives joined any walk-out.

However, Gisèle Littman was hardly some randomly invited speaker. She is on the editorial board of the Journal for the Study of Antisemitism (along with the likes of Daniel Pipes, Andrew Bostom – and Philip Spencer, for that matter). Nor can the views she expressed have come a surprise to the CST or any of the other participants at the seminar.

Littman is a notorious Islamophobe, one of the most signficant figures in the so-called counter-jihad movement. She is the author of the “Eurabia” thesis – a conspiracy theory according to which European governments have done a secret deal with the Arab world to facilitate the Islamic takeover of Europe, which will result in non-Muslims being reduced to a state of “dhimmitude”, treated as second-class citizens subservient to their Muslim conquerors. This paranoid fantasy has been dubbed “The Protocols of the Elders of Mecca” and indeed the parallels with classic antisemitic conspiracy theories scarcely need underlining.

The Eurabia theory was a major source of inspiration to Norwegian mass murderer Anders Breivik, whose manifesto contains over 1,500 references to it. In fact Breivik includes “implementation of the EU’s Eurabia project” on his list of the “recent and ongoing acts of treason” that led him to carry out the massacre on Utøya. (Typically, Littman’s response was to issue a statement suggesting that Breivik’s manifesto was likely to be a fabrication and that the police might well have allowed him to go ahead with his murders as part of some plot to suppress criticism of Islam.)

As for Manfred Gerstenfeld, his opinions are hardly a secret either. Earlier this year he contributed an op ed to the Israeli newspaper Yedioth Ahronoth in which he complained that it was regarded as “highly politically incorrect” to point out that “while Western culture is problematic, contemporary Islamic culture is inferior to it”. He added that Western Muslims should be happy to accept his views on the inferiority of their culture:

“If the two cultures were equal, the West could theoretically act toward Muslims in their countries like many Muslim countries behaved toward their Jews in the decades after the Second World War. If the West acted in a similar way, it could restrict civil rights and confiscate the Muslims’ passports and belongings. Thereafter, it could force them out. If the West followed the 1967 Libyan acts against Jews they could even kill some.”

Yet Dave Rich, Mark Gardner, David Hirsh and others happily attended a seminar that included these speakers. It’s not difficult to imagine how different their response would be to a seminar featuring individuals who asserted that Jews are conspiring to take over Europe or made claims about the inferiority of Jewish culture. The CST would demand that the speakers should be banned or that the institution hosting the event should cancel it. But when it’s a case of Zionist extremists promoting bigotry against Muslims, then the CST evidently thinks it’s enough to go along to the seminar and politely raise their “concerns” that such hate-speech is “incorrect, unacceptable and self-defeating”.

Finally, let us note that the JC also reports that another speaker at the seminar, disgraced former MP Denis MacShane, was “given an award for his work in fighting antisemitism”. MacShane is no stranger to Islamophobic fantasies himself. He was jointly responsible for the 2006 All-Party Parliamentary Inquiry into Antisemitism, which made the ridiculous claim that a dangerous alliance had been forged between fascists and Islamists on the basis of a common hatred of Jews and Zionists – at a time when it was clear that the far right in Britain was increasingly embracing Zionism and even proposing an alliance with right-wing Jews on the basis of a common hatred of Islam and Muslims.