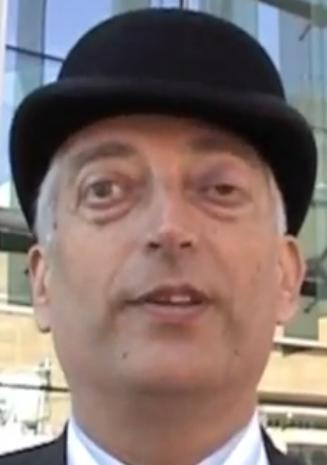 Over at Liberal Conspiracy Sunny Hundal draws our attention to remarks made by “Lord” Christopher Monckton, a leading figure in the UK Independence Party, on a right-wing Canadian radio talk show.

One of the hosts tells Monckton that Paul Weston of the British Freedom Party was a recent guest on the show and asks him for his opinion of the BFP. Monckton expresses his regret that former UKIP members like Weston have split away from the party to join the BFP and adds: “the British Freedom Party won’t really come to anything very much, I don’t think, and I would like them all to come back and join us and we stand together”.

Sunny points out that the interview took place on 15 March before the news broke that Stephen Lennon of the English Defence League was to join the BFP leadership. However, an alliance between the BFP and EDL had been established long before that, back in November last year, which didn’t prevent Monckton from calling on former Ukippers in the BFP to rejoin the party.

If any BFP members are inclined to respond favourably to Monckton’s appeal they will run up against the following clear statement on the UKIP website, which he has apparently overlooked:

“Membership is not available to anyone who is or has previously been a member of the British National Party, National Front, British Freedom Party, British People’s Party, English Defence League, Britain First or the UK First Party. Any applications made from people who are or have been members of these organisations will be refused, and any subscriptions collected will be refunded. By applying for membership you certify that you are not and have never been a member of either [sic] of these parties.”

So we have Monckton, who is UKIP’s former deputy leader and current head of its policy unit, calling on supporters of a far-right organisation who are explicitly banned from membership to join UKIP.

In part this no doubt reflects the chaotic state of a party that recently lost out on getting candidates elected to the London Assembly because of an error in filling out their nomination forms, resulting in the party’s name failing to appear on the ballot papers. More fundamentally, however, it illustrates the presence within UKIP of a hardline element who share the extremist ideology of the so-called counterjihadist movement.

Former UKIP leader Lord Pearson, to whom Monckton served as deputy, is only the most prominent example of this tendency. Recently a UKIP council candidate in Sheffield had his party’s endorsement withdrawn after the exposure of a blog post he wrote supporting the views of Anders Breivik. Another council candidate in Oxford received damaging publicity after sending an email describing the Qur’an as “a fascist book”. For UKIP members like these, the BFP are not far-right fanatics from whom the party should publicly dissociate itself, but rather co-thinkers who properly belong in the ranks of UKIP.

Current UKIP leader Nigel Farage is evidently keen to sideline this element in the interests of winning over dissatisfied Tory supporters who would draw the line at backing a party with political links to the far right. However, Monckton’s radio interview indicates the problem Farage faces, for the extremist element clearly extends right up into the the top ranks of the party.

In a comment on Sunny Hundal’s article Farage emphatically rejects the possibility of BFP members joining UKIP: “As the leader of UKIP I can say that we do not want these people under any circumstances. We are the only party who ban far right extremists from joining which gives an indication of how strongly we feel about this. UKIP are a libertarian party which believes in freedom and democracy.”

Perhaps this explains why Monckton’s name has suddenly disappeared from the list of spokesmen and specialists on the UKIP website.