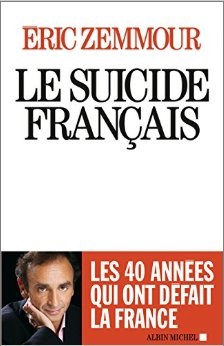 That the title of the bestselling book in France this autumn is The French Suicide speaks volumes about the mood in Paris. Each day, 5,000 people buy Éric Zemmour’s 544-page lamentation on “the 40 years that have undone France”.

Zemmour is a columnist for the conservative newspaper Le Figaro and a well-known television personality. His book has even overtaken former first lady Valérie Trierweiler’s account of President François Hollande’s boorishness.

Suicide is a bitter tale of a vague conspiracy by cowardly politicians, feminists, the “gay lobby,” film-makers, songwriters, Muslims, immigrants and high finance to destroy the French family and nation. Zemmour might quote Jean-Marie Le Pen, the founder of the far-right National Front (FN), who often says, “I say out loud what people think in quiet”.

The success of Zemmour’s book is widely interpreted as evidence that the ideas of the FN have penetrated mainstream society. Many passages could easily come from speeches by FN leader Marine Le Pen.

“Since [the Maastricht Treaty in] 1992, France has abandoned her national sovereignty in favour of a monstrous Brussels bureaucracy,” Zemmour writes.

He seems to excuse Jean-Marie Le Pen for having said the deaths of six million Jews in Nazi gas chambers was “a detail” of history. The massacre of the Jews “is not the strategic heart of the war,” Zemmour writes. “The Shoah [Holocaust] changed the face of Jews and of humanity, but it in no way changed the outcome of the world conflict.” That was Le Pen’s argument, exactly.

Zemmour criticises Louis Malle’s 1987 film Au Revoir Les Enfants as “the tipping point when the history of the second World War was reduced to the extermination of the Jews”.

The most controversial part of Zemmour’s book is his 17-page attack on US historian Robert Paxton, whose 1972 book on Vichy France demolished General Charles de Gaulle’s myth that all of France resisted Nazi occupation. Zemmour’s assertion that the strategy of Vichy leaders Philippe Pétain and Pierre Laval was “to sacrifice foreign Jews to save French Jews” is perceived as revisionism and an attempt to rehabilitate Vichy. Le Monde newspaper published two pages, including an article by Paxton, rebutting Zemmour.

His book may be a milestone in Marine Le Pen’s quest for legitimacy for her party, but his indulgence towards Vichy is a bridge too far, even for the FN. “Nothing can be saved from Vichy, nothing,” the FN’s vice president Florian Philippot said. “Vichy was not France. France was in London [with de Gaulle]. It was those who resisted who saved Jews.”

As Zemmour tells it, France’s May ’68 “revolution” and the death of de Gaulle marked the beginning of France’s “suicide”. He accuses the late Margaret Thatcher of “handing an entire continent over to the forces of free trade and liberal globalisation”.

Much of Zemmour’s book is nonsense. “The emergence of triumphal homosexuality is linked to a decisive evolution of capitalism,” he writes.

He attributes the political and financial scandals that have dogged France’s last four presidents to French reporters and judges childishly aping their US counterparts in the Watergate scandal.

Zemmour condemns the 1972 law that punishes landlords who refuse to rent to foreigners and employers who give hiring preference to French citizens.

Feminism and 1970s laws legalising abortion and divorce by mutual consent “paradoxically achieved the dream of absolute irresponsibility of generations of male predators whom they condescendingly referred to as ‘machos’: no need to marry for sex; divorce almost as simple as repudiation; free abortion – all in the name of freedom for women”.

The son of Berber Jewish immigrants from Algeria, Zemmour places the French “republican model” and the total assimilation of immigrants above all else.

In 2009, he criticised then justice minister Rachida Dati for naming her daughter Zohra, after her own mother. He devotes seven pages in The French Suicide to the first names of the children of Muslim immigrants. “The French don’t understand why they keep naming their children Mohamed or Aicha, rather than François and Martine. They see in this obstinacy the determination not to integrate, not to become like them.”

France, Zemmour concludes, now “sees herself forced to swallow values and mores that are the extreme opposite of what she built over centuries . . . France is dying, France is dead. Our elites . . . spit on her tomb and trample on her smoking corpse”. It is a grim self-image for such a great country, but it has obviously struck a chord.