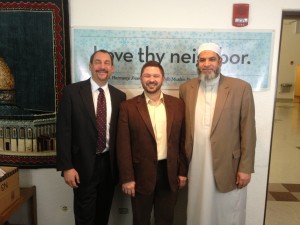 The Colorado Muslim Society paid $5,000 for the “Love Thy Neighbor” ads, which focus on love as “a shared concept in the three religions.” Other religious leaders and interfaith groups then publicly embraced the message:

They said the ad they unveiled — at a time on the calendar devoted to love and understanding — is meant to respond to recent national tragedies and to replace anti-Muslim ads placed on buses last month.

“Our country is in the midst of a lot of divisions,” Temple Emanuel Senior Rabbi Joe Black said. “Hatred is only going to further violence and the breakdown of society.”

Denver’s tolerance initiative follows the lead of many faith groups around the country protesting the Islamophobic ads. The Denver ads proclaim: “9,757 Deadly Islamic Attacks Since 9/11/01. It’s Not Islamophobia. It’s Islamorealism.” Colorado’s religious leaders also stood together in solidarity after the 9/11 attacks in 2001.

Public renunciation of anti-Muslim bigotry is much needed, as hate crimes against Muslims have held steady at a record high. Meanwhile, anti-Islamic rhetoric has become commonplace in mainstream media.