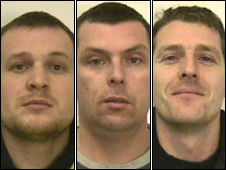 Three men have been jailed for three years for a campaign of racial harassment against a Muslim colleague.

Amjid Mehmood was tied to railings and force-fed bacon while a rucksack with protruding wires was put on his locker, Wolverhampton Crown Court heard.

The nine-month campaign of abuse came to light when Mr Mehmood told police.

McDermott, 31, from Blue Stone Walk, Sean Melaney, 28, of Steatham Grove, Kingstanding, and Skett, 39, of College Road, Erdington, were each jailed for three years.