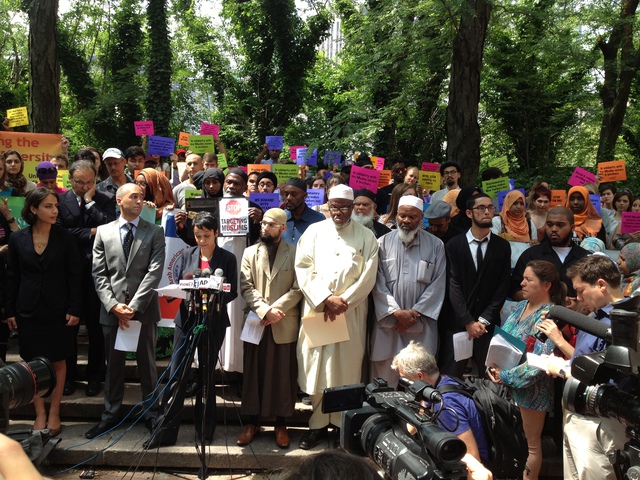 The New York Police Department’s widespread spying programs directed at Muslims have undermined free worship by innocent people and should be declared unconstitutional, religious leaders and civil rights advocates said Tuesday after the filing of a federal lawsuit.

“Our mosque should be an open, religious and spiritual sanctuary, but NYPD spying has turned it into a place of suspicion and censorship,” Hamid Hassan Raza, an imam named as a plaintiff, told a rally outside police headquarters shortly after the suit was filed in federal court in Brooklyn.

The city’s legal department responded with a statement calling the intelligence-gathering an appropriate and legal tactic that helps keep the city safe from terrorism.

The suit asks a judge to order the nation’s largest police department to stop their surveillance and destroy any related records. It’s the third significant legal action filed against the NYPD Muslim surveillance program since details of the spy program were revealed in a series of Associated Press reports starting in 2011.

The lawsuit alleged that Muslim religious leaders in New York have modified their sermons and other behavior so as not to draw additional police attention. The suit was filed against Mayor Michael Bloomberg, police commissioner Raymond Kelly and the deputy commissioner of intelligence, David Cohen.

“Through the Muslim surveillance program, the NYPD has imposed an unwarranted badge of suspicion and stigma on law-abiding Muslim New Yorkers, including plaintiffs in this action,” according to the complaint, which was filed on behalf of religious and community leaders, mosques, and a charitable organization. The plaintiffs are represented by the American Civil Liberties Union, the Creating Law Enforcement Accountability & Responsibility project at CUNY School of Law and the New York Civil Liberties Union.

Bloomberg and Kelly have defended the department’s actions as necessary to identify and thwart terrorist plots, though a senior NYPD official testified last year that the unit at the heart of the program never generated any leads or triggered a terrorism investigation.

“The NYPD’s strategic approach to combating terrorism is legal, appropriate and designed to keep our city safe,” a top city lawyer, Celeste Koeleveld, said in a statement Tuesday. “The NYPD recognizes the critical importance of ‘on-the-ground’ research, as police need to be informed about where a terrorist may go while planning or what they may do after an attack, as the Boston Marathon bombing proved.”

The lawyer apparently was referencing reports that the Boston attackers had contemplated blowing up their remaining explosives in New York before one of the brother was killed and the other captured.

“Cities cannot play catch-up in gathering intelligence about a terrorist threat,” Koeleveld added. “Our results speak for themselves, with New York being the safest big city in America and the police having helped thwart several terrorist plots in recent years.”

The lawsuit, which accuses the city of violating the First and Fourteenth amendments, is the latest legal challenge to the activities of the NYPD Intelligence Division. A year ago, the California-based civil rights organization Muslim Advocates sued the NYPD over its counterterrorism programs. This year, civil rights lawyers urged a judge to stop the NYPD from routinely observing Muslims in restaurants, bookstores and mosques, saying the practice violates a landmark 1985 court settlement that restricted the kind of surveillance used against war protesters in the 1960s and ’70s.

The lawsuit describes a pattern of NYPD spying directed at Muslims in New York since the 2001 terrorist attacks.

Raza said he began taping his sermons at a Brooklyn mosque because of concerns that the NYPD was monitoring what he said and would take his words out of context. In addition, Raza and other religious leaders became highly suspicious of new members eager to join their communities because of the department’s rampant use of secret informants, the complaint said.

Since news spread that an informant had infiltrated Raza’s mosque, “attendance has declined, and everyone in the congregation has become afraid to talk to the newcomers,” Raza told dozens of supporters of the lawsuit at Tuesday’s rally. “A once-vibrant community has become even more scared and suspicious. I cannot believe this has happened in a country that I know and love.”

The lawsuit also details how the NYPD used an informant to spy on 20-year-old Asad Dandia, a college student who ran a charitable organization called Muslims Giving Back. Dandia’s group gave food to the needy. An NYPD informant, Shamiur Rahman, acknowledged last year in an interview with the AP that he had spied on Dandia on others.

The informant had approached Dandia, claiming he “had a very dark past and he wanted to be a better practicing Muslim,” Dandia said at the rally. He invited the informant to volunteer and they “bonded,” he added. Once the he learned of Rahman’s true identify, he said, “I felt betrayed and hurt because someone I had taken as a friend and brother was lying to me and used me.”

Dandia told the crowd that the charity’s ability to raise money and help the community has declined because it’s been targeted by NYPD counterterrorism programs.

The plaintiffs asked a judge to appoint a monitor to ensure the police department follows the law. This is second time this month that the prospect of a court-appointed monitor has been raised for the NYPD. The department’s stop-and-frisk tactic that overwhelming targets minorities has come under fire, with a trial recently ending in federal court that could decide whether the policing practice is unconstitutional. If the judge rules against the NYPD in the stop-and-frisk case, the Justice Department said it would support appointing a federal monitor.

Kelly and Bloomberg defend that program as well and have said federal oversight would put the city in danger. Asked about the recent uproar once-secret surveillance by the National Security Agency, Kelly told reporters that he believes most Americans are accepting of the fact that the government collects data on phone calls and Internet usage but deserved to know it was happening. “I don’t think it ever should have been made secret,” he said.

Details of the Associated Press investigation into the NYPD spying programme can be found here.