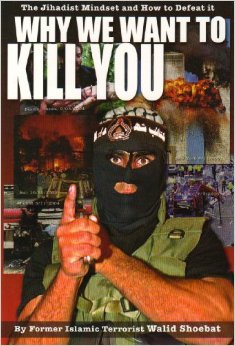 “Walid Shoebat, Kamal Saleem and Zachariah Anani are the three stooges of the Christian right. These self-described former Muslim terrorists are regularly trotted out at Christian colleges – a few days ago they were at the Air Force Academy – to spew racist filth about Islam…. These men are frauds, but this is not the point. They are part of a dark and frightening war by the Christian right against tolerance that, in the moment of another catastrophic terrorist attack on American soil, would make it acceptable to target and persecute all Muslims, including the some 6 million Muslims who live in the United States. These men stoke these irrational fears….

“The public denigration of Islam, and by implication all religious belief systems outside Christianity, is part of the triumphalism that has distorted the country since the 9/11 attacks. It makes dialogue with those outside our ‘Christian’ culture impossible. It implicitly condemns all who do not think as we think and believe as we believe as, at best, inferior and usually morally depraved. It blinds us to our own failings. It makes self-reflection and self-criticism a form of treason. It reduces the world to a cartoonish vision of us and them, good and evil. It turns us into children with bombs.”