That’s the headline to a report in the Daily Express. St Peter’s Catholic church in Stoke-on-Trent has closed due to a declining congregation and the building has been sold to “a local Muslim community”.

Though the article itself is fairly innocuous, the headline was evidently chosen in order to reinforce an “Islamification of Britain” narrative. So it’s hardly surprising that it was taken up by the English Defence League: 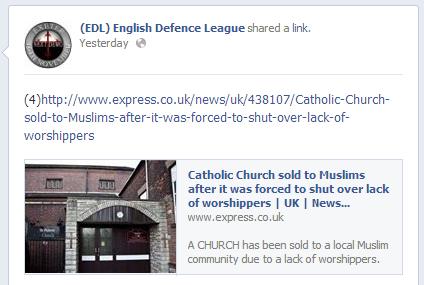 This provoked the usual anti-Muslim abuse and explicit calls for violence from EDL supporters:

Bear in mind that it’s less than two years since EDL member Simon Beech and his associate Garreth Foster were both jailed for ten years over an attempt to burn down a Stoke-on-Trent mosque.