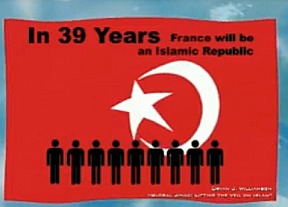 A Roman Catholic cardinal has caused an uproar at the Vatican by screening a spurious YouTube video that makes alarmist predictions about the growth of Islam in Europe.

The seven-minute clip, called “Muslim Demographics,” was the talk of an international gathering of bishops on Monday, two days after Cardinal Peter Turkson screened it during a free discussion period.

Turkson, a Ghanaian who is based in the Vatican and is president of its Council for Justice and Peace, sparked consternation among his fellow bishops over the clip.

“As we were arriving this morning I was asked several times ‘Who planned it? Whose was it? Who is behind it?” Father Thomas Rosica said at a briefing for journalists, who are not allowed to attend the synod sessions, the first since the screening.

He said the clip had sparked “the most animated” discussion so far at the three-week conference, and one bishop said he would rebut Turkson by presenting a report with contrary data. The clip has brought Islam to the top of the agenda at the synod, attended by 262 bishops. “Islam is the buzzword,” Rosica said.

Turkson could not be reached for comment on why he chose to screen the video during the Vatican meeting, where the bishops are discussing ways of winning back lapsed Roman Catholics in developed countries.

The clip, which has been viewed over 13 million times on YouTube since it was uploaded by an anonymous user in 2009, combines dramatic music with skewed population statistics to make claims about various European countries such as “In just 39 years France will be an Islamic republic.”

Critics have pointed out that the fertility figures used in the video, which claim French women have an average of 1.8 children while French Muslim women have 8.1 children, cannot be genuine as France does not collect statistics by religion.