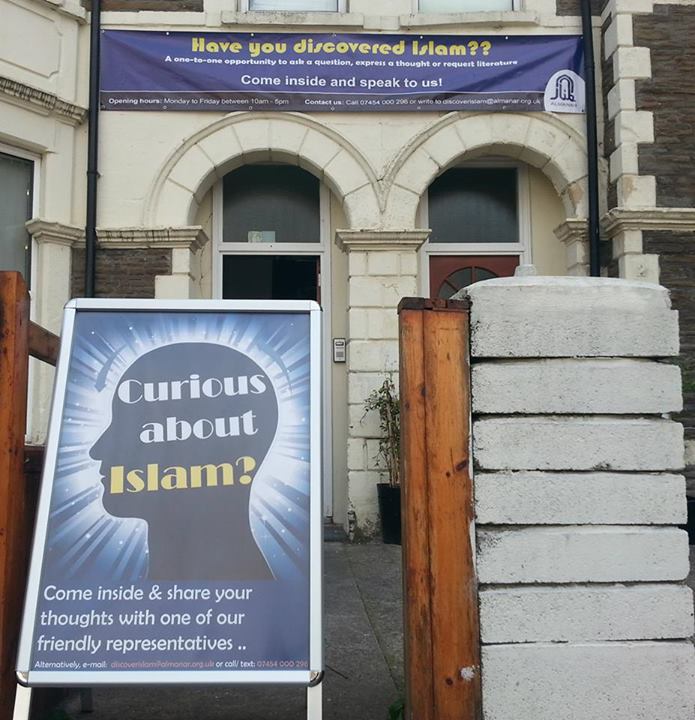 The mosque in Cardiff that two young men attended before they left for Syria and appeared in an extremist recruitment video has denied having anything to do with their radicalisation – and instead claimed they could have been inspired by images in the mainstream media.

Reacting in detail for the first time, the Al-Manar centre [pictured] in the Welsh capital denied that visiting preachers may have prompted the men to leave for Syria and join the Islamic State in Iraq and the Levant (Isis) terror group.

In a statement released to the Guardian and ITN, the Al-Manar centre said it did not control those who attended for prayers and officials would have sought to dissuade the men from leaving for Syria if they had known they were going.

The centre’s denial came as more than 100 Islamic prayer leaders from various denominations of Islam signed a letter calling on British Muslims not to travel to Iraq or Syria to fight.

“We urge the British Muslim communities to continue the generous and tireless efforts to support all of those affected by the crisis in Syria and unfolding events in Iraq, but to do so from the UK in a safe and responsible way,” says the open letter, released on Friday.

A lawyer for the Al-Manar centre, Saghir Hussain, claimed some editors had targeted the mosque as part of an Islamophobic agenda. He said: “Last time it was the Trojan horse schools in Birmingham, this week it’s us, next week it could be somewhere in Devon.”

Schoolfriends Nasser Muthana and Reyaad Khan, both 20, appeared in an Isis video last month. Muthana’s brother, Aseel, 17, is also thought to be in Syria. All three attended the Al-Manar centre, leading to it becoming a focus for questions over what inspired them to join Isis.

In the centre’s statement issued on Friday it insisted it had a long-established record of promoting the “core Islamic values such as integrity, hard work, tolerance and community cohesiveness”.

It added: “Regarding the young Muslims featured in the media who had travelled to Syria, it should be noted that the mosque, as any other, does not control those who can attend for prayers. The mosque is not in the business of making value judgments on the soundness of an individual’s Islam from the way they look. Whether or not any individual who has gone on to be involved in acts that are considered to be illegal has prayed in the mosque bears no weight on the message the mosque imparts.”

Privately, some Muslim leaders in Cardiff have criticised the centre, claiming it has given a platform for extremist views, such as those of the Saudi preacher Mohammed al-Arifi. He preached there in 2012 and has since been banned from the UK. The centre said: “Concerning guest speakers, while the term ‘extremism’ has been used, the mosque has not seen anything unequivocal from its guest speakers that might be considered of concern to the community.”

It blamed the media for failing to conduct “any real research” about how the men left for Syria. The statement said: “The aim seems to have been a focus purely on a non-evidence based and highly-contentious theory that there is somehow a specific conveyor-belt to violence.”

The centre said it had been liaising both with South Wales police and the Muthana brothers’ father, Ahmed, who has also questioned the role the centre played in his sons’ actions.

It concluded: “The young men mentioned learned nothing of fighting abroad from the mosque; rather, in all likelihood they were moved to action by what they have seen in the mainstream media. It is not difficult to understand why young men might be motivated to act on their own accord, but had they had discussions with their parents or anyone affiliated with the mosque, they would have been categorically dissuaded from taking this particular action.”