Open Letter: British Prime Minister’s inquiry into the Muslim Brotherhood in the UK

We, the undersigned, express our deep concern at the Prime Minister’s recent decision to order a “review”, looking into the Muslim Brotherhood’s activities in Britain and abroad. We believe that the process and terms of the review represents a risk to British liberties and could further erode human rights standards.

We are concerned that this review is the result of pressure placed on the British government by undemocratic regimes abroad, such as Saudi Arabia and the United Arab Emirates. It is not acceptable that any autocracy attempts to limit the lawful activities of any group in a democracy. The Prime Minister risks setting a dangerous precedent.

The review, to be conducted by the British Ambassador to Saudi Arabia, comes at a time when the Muslim Brotherhood, victors in Egypt’s only free election to date, is being subject to the most ferocious repression by the military regime. With hundreds of Egyptians killed, over 1000 sentenced to death in farcical “trials” and tens of thousands languishing in prisons, the British government remains largely silent.

We would advocate that British government policy towards groups such as the Muslim Brotherhood and others should be determined by the behaviour of those groups and their ability to participate in democratic political life, rather than by foreign policy considerations and strategic alliances with other governments. Since the Muslim Brotherhood has been a full and democratic participant in political life in many countries we are concerned that they are targeted for purely political reasons, rather than any concern for security. One does not need to support a group’s outlook or programme to realise that repression of any organisation on this basis is a denial of human rights and democracy.

In Britain, supporters of the Muslim Brotherhood have been active within the grass roots of social, civic and welfare activities. Attempts to police its peaceful and lawful activities could threaten the liberties of others. At a time of widespread attacks on Muslim beliefs and organisations in Britain, this review risks reinforcing negative perceptions of Muslim citizens, and the view that their participation in public life is suspicious and unwelcome. The inquiry could further damage Britain’s international reputation as a guardian of international law and human rights.

We urge the Prime Minister to reconsider the process and the terms of the review and reject undemocratic foreign pressure on British politics. 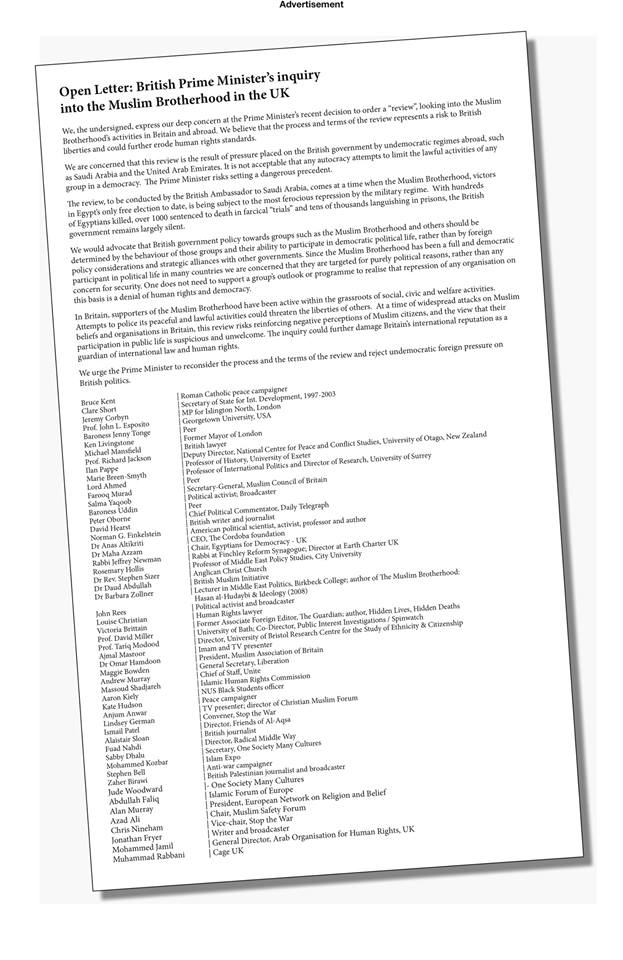