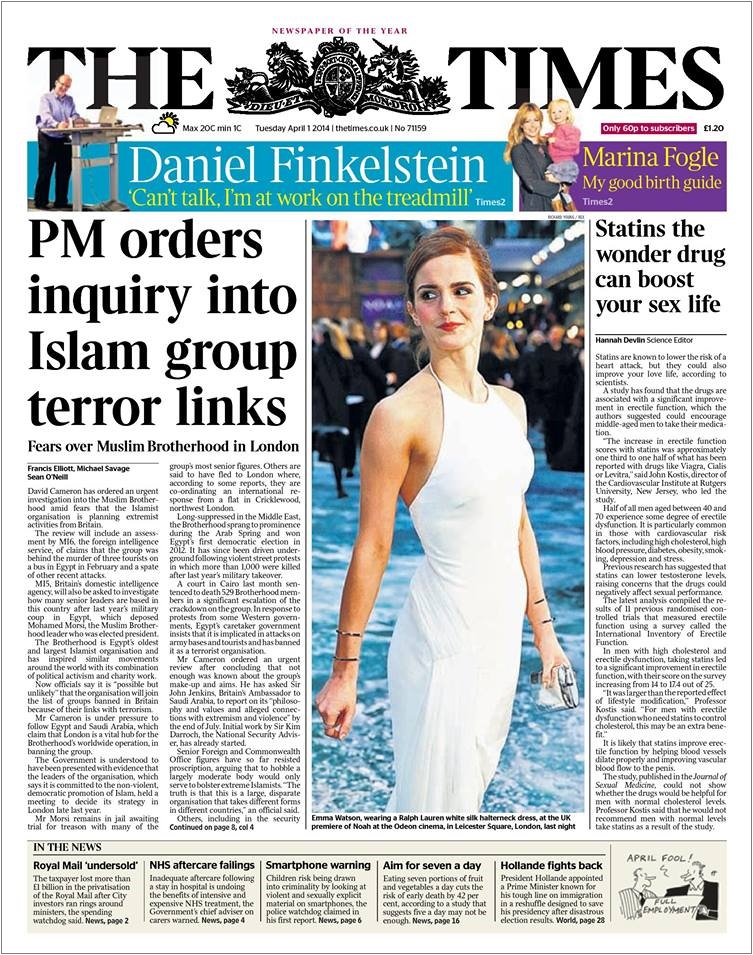 This is the front page of today’s Times. My first thought was that it must be an April Fool’s Day spoof. I mean, the Muslim Brotherhood’s terror links? What kind of nonsense is that? But apparently it’s quite serious. You can read the report here.

Update:  The Telegraph‘s defence editor Con Coughlin has weighed in with an article (“Banning the Muslim Brotherhood would be a welcome step in the war on militant Islam”) applauding Cameron’s decision to take action against an organisation which, Coughlin assures his readers, is “prepared to resort to any means possible – including the use of violence and terrorism – to achieve their goals”.

Update 2:  The Independent reports that Cameron told a press conference: “We want to challenge the extremist narrative that some Islamist organisations have put out. What I think is important about the Muslim Brotherhood is that we understand what this organisation is, what it stands for, what its beliefs are in terms of the path of extremism and violent extremism, what its connections are with other groups, what its presence is here in the UK.”

The report adds: “Security analysts are puzzled by the way the matter is being handled. If the Government really has received credible information that the Brotherhood is carrying out violent acts abroad from a British base, then normal practice would be to have an operation conducted by MI5, MI6, GCHQ, Scotland Yard’s Counter Terrorism Command and foreign intelligence services. It would, they point out, be done secretly and not through No 10 briefings.”

Further: “the exact nature of the charges against the Brothers has remained unclear. An attack on a tourist bus in Sinai, in which two South Korean nationals and the Egyptian driver was killed in February last year, is supposedly being looked at. However an Islamist militant group, Ansar Bayt al-Maqdis, linked to al-Qa’ida, with a lucrative smuggling trade, had claimed responsibility and no proof has been produced of Brotherhood involvement.”

Also: “The Prime Minister’s seeming lack of knowledge about the Brotherhood is also viewed as odd. Diplomats and intelligence officials had kept in touch with the movement during its years in opposition and members of Mr Morsi’s government would quite often drop in for informal talks at the home of the British ambassador in Cairo. A number of papers have also been produced on the Morsi government and the Brotherhood leadership.”