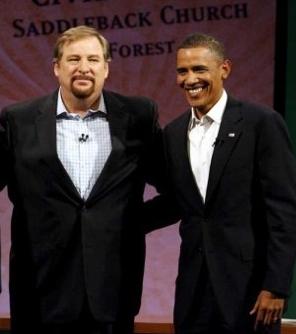 An outreach effort to Muslims initiated by Saddleback Church in Lake Forest has sparked a national uproar among evangelical Christians, with some accusing the Rev. Rick Warren, Saddleback’s pastor, of betraying core Christian principles and Warren responding that his beliefs and intentions have been misrepresented.

Since an Orange County Register article published Feb. 26 detailed the outreach effort, evangelicals across the country have taken to blogs, social media and Christian news outlets to debate whether and how Christians should forge relationships with people of other faiths. Longtime critics of Warren have published lengthy online accusations that the influential pastor, who delivered the invocation at President Barack Obama’s 2009 inauguration, has gone too far in seeking theological common ground with Muslims.

Chris Rosebrough, a religious studies graduate of Concordia University in Irvine who hosts an online Christian radio talk show in Indianapolis, said that response to Saddleback’s outreach “has created a national, even an international uproar…. Looking at the Christian blogosphere, this is the number one viral story.”

The most controversial part of the outreach effort appears to be a document outlining areas of shared belief between Christianity and Islam co-authored by Abraham Meulenberg, a Saddleback pastor in charge of interfaith outreach, and Jihad Turk, director of religious affairs at a mosque in Los Angeles. The document, titled “King’s Way“, was unveiled at a December dinner at Saddleback attended by 300 Christians and Muslims, including Holladay.

A copy of the document was given to the Register on condition that it not be published in its entirety. The document states that Christians and Muslims “believe in one God” and that members of both faiths agree “there is only one God, the one and only divine being.” The document cites side-by-side quotations from the Bible and the Quran to illustrate its statements.

Critics, including Rosebrough and many of the more than 400 people who commented on the online edition of the Register article, say that any suggestion that Christians and Muslims worship the same God amounts to abandonment of orthodox Christianity.

Here are just a few of the more than 400 comments that can be found under the original Register report:

“Allah is an Arab moon god…one of many…thus the crescent. There is no equivalence.”

“The God of Abraham Isaac and Jacob, The God of Israel, YHWH, is NOT the same god as the god of Islam. The god of Islam is, according to the Q’uran unknowable and vengeful, while the God of the Bible is a personal, intimate and loving God! ”

“Mr Warren, feel free to build that bridge, and when they turn on you, don’t come crying to any of us for help. The Muslim community has one goal, that is the eradication of Jews, Christians, and Catholics. ”

“…the idea that christianity (or any other respectable faith) can ‘reach out’ to muslims to bridge ‘misunderstandings’ is a total joke. That sounds just like Neville Chamberlain saying ‘I have returned from Germany with peace in our time.’ Let’s be honest and frank: Islam is evil. It is the same as Nazi fascism in terms of its disruptive and destructive collective conduct. What other religion (currently) blows-up innocent people on an almost daily basis, is the most economically non-productive society on Earth, keeps woman suppressed (uneducated, beaten, subservient), and openly threatens (not just Iran) to ‘wipe Israel off the face of the Earth’?”

“What part of the fact that muslims hate us because we are not muslims is so hard to understand? There is no bargaining or dealing with them, Islam wants everyone to be muslim, or dead if they aren’t converted .. yes it’s that simple.”

“Islam began with the ranting of a ruthless Arab bandit leader, who robbed caravans and led his band of robbers to annihilate defenseless cities. He also robbed and burned many Byzantine churches, killing thousands of Christians in his campaign, and also destroying Jewish settlements. His so-called ‘visions’were the basis for the Islamic holy book called the Koran. The religion of Islam permeates the entire Arabic world, which believes their Mahdi will come very soon and kill everyone in the world who is not a Muslim. Our own president has given this sadistic religion credibility by holding Muslim affairs in the White House. Now deluded so-called pastors across our nation and promoting unification, under the delusion that Christians and Muslims worship the same God. This is a dangerous apostasy that must be exposed and challenged.”

“Have you ever READ the Qu’ran? Do you understand that Islam is not even a religion? It is a Totalitarian Political system with ONE goal -Sharia law world wide. They either take over a country by changing the laws to be Sharia compliant, or they slaughter the people. THIS is who you say serve the same God as the God of Abraham, Isaac and Jacob? NO. Their god is a false god. They are serving satan and they don’t even know it. But YOU, Mr. Warren, you should know better!”

“Our problem here in America is that, as much as we want to embrace everyone of all faiths, beliefs, and cultures, and have attempted to put laws in place to preserve that, we are fearful of a religion whose tenets avowedly declare the end of all who do not believe as they do. It’s really hard for us to ‘put our arms around that’ and figure out a way to embrace those who adhere to a faith that, honestly, in its most sacred writings and in the example of their most esteemed prophet—practiced, taught, and required CONVERSION THROUGH FORCE—even unto death, and that the highest reward is for the killing of others who do not believe. Just as we Americans would, generally, have a problem with dealing with avowed Nazis—or any group bent on the genocide of others or the violent overthrow of our government, so we have a problem with those espousing the doctrines, teachings, and precepts presented in the Koran.”

“Imagine all those fool misisonaries who wasted their time sharing the Gospel of Jesus Christ with Muslims. Now Rick Warren says we don’t need to evangelize at all! The god of Muhammed Atta flying into the World Trade Center is apparently Christians’ God, too! Who knew?”

“If (and perhaps when, not if) war breaks out in the Middle East as the islamic countries calling for the destruction of Israel make good on their threats, it will be interesting to see which side the muslims involved in these ‘interfaith’ activities align themselves with. It would also be interesting to know if, as part of this ‘document’ co-authored by Abraham Meulenberg and JIHAD (really?) Turk, that both organizations denounce hamas and hezbollah and their terrorist actions.”

“So Rick Warren calls Muslims his ‘brother’ and says Christians and Muslims worship the same God does he? Well, I guess Rick forgot to read 2 Corinthians 6: 14-17. Witnessing is one thing; telling them we have the same God is quite another matter. This is FALSE TEACHING! This is a hellish thing to do and shows he has no concept of Christainity whatsoever! We as Christians are to get Muslims to repent and be saved, and NOT tell them we worship the same God!”

“At a time when the Body of Christ has a Christian brother with a death sentence in Iran for denying Allah is God, refusing to bow the knee to a false God, Allah, Rick Warren wants to claim we worship the same God. That is Anti-Christ to the core. IS THERE SALVATION IN BELIEVING IN THE MUSLIM GOD, ALLAH, MR WARREN?”

“Islam clearly teaches Jesus Christ did not die on the cross, no Resurrection from the dead. A lie from hell itself.”

“REMEMBer the devil is describe in the scriptures as a deceiver, ‘And no wonder! For Satan himself transforms himself into an angel of light’. 2nd Corinthians 11:14. Oh! How happy was he on those 911 pictures from the devasted twin towers that his followers had destroyed. But his time is almost over, and he knows that.”