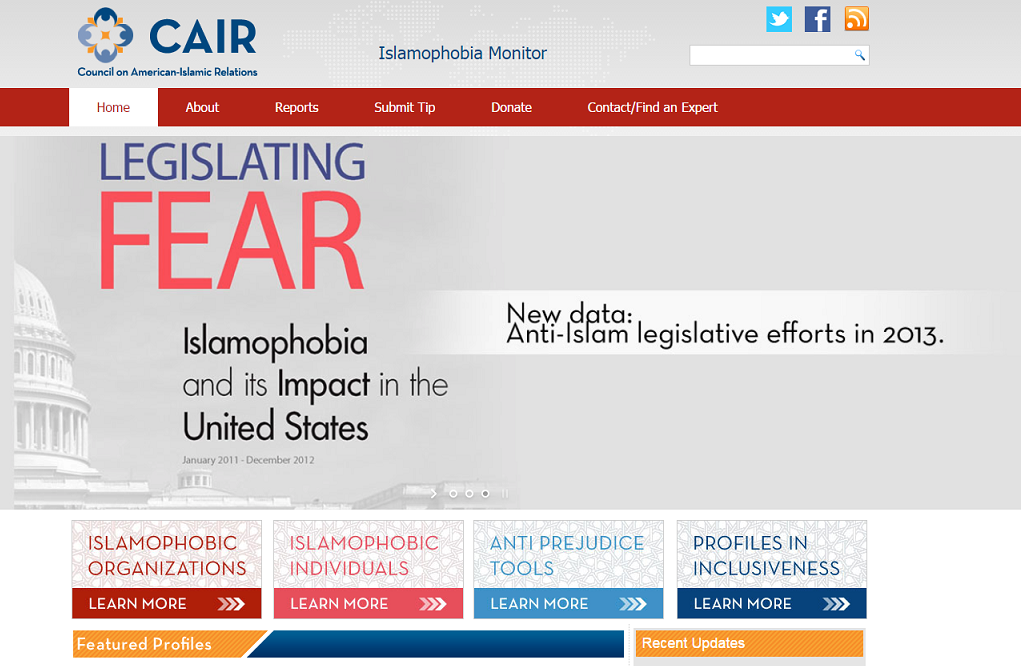 The Council on American-Islamic Relations (CAIR) today launched Islamophobia.org, the latest element in the Muslim civil rights organization’s work to monitor and challenge the growing anti-Muslim bigotry in American society.

CAIR’s Islamophobia.org site presents detailed profiles of a number of individuals and institutions involved in the American Islamophobia network.

“Islamophobia.org is a reflection of CAIR’s philosophy of educating people and empowering them toward positive action,” said CAIR Department to Monitor and Combat Islamophobia Director Corey Saylor.

“Since CAIR included the first Islamophobe profiles in its 2013 report ‘Legislating Fear,’ local communities have used them to begin positive conversations leading to the rejection of bigotry in all its forms,” said Saylor. “We intend to continue this community partnership by further empowering local advocates with a centralized resource that provides detailed information about the haters who tour the nation spreading misinformation and religious division.”

The searchable collection of profiles includes well-known hate entities such as Frank Gaffney’s Center for Security Policy and Robert Spencer’s Jihad Watch. Additionally, the site features information on key, but less visible members of the network, such as a number of local ACT! for America leadership.  The site also lays the groundwork for a forthcoming CAIR initiative to counter all types of prejudice in the United States.

CAIR believes Islamophobia in the United States is a current manifestation of the issue of prejudice that has plagued our nation since its earliest days. It is the same old hate, just with a relatively new target. Muslims, like Malcolm X, have been involved in historical American movements challenging prejudice, but only after the 9/11 terror attacks did they become a primary focus for purveyors of hate. With this in mind, CAIR is dedicated to countering prejudice of all types. We recognize that while Muslims are a primary focus of hate today, it will one day pass to another group.

Detailing and describing the American Islamophobia network was phase one of our strategy to address anti-Islam hate in our nation. Now that the Islamophobia network’s prejudice and manipulative efforts to make America a nation of fear are exposed, we will shift more of our energy into building an America that is an expression of its greatest ideals.