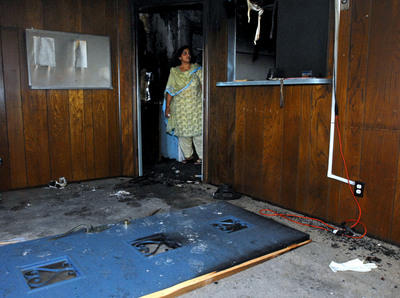 ANTIOCH, Calif. — An Islamic group called on authorities Monday to launch a hate-crime investigation into a fire that caused $200,000 in damage to an Antioch mosque.

Investigators with the Contra Costa County Fire Protection District said they are treating the fire that broke out early Sunday morning at the Islamic Center of the East Bay as possible arson, but have found no evidence it was motivated by religion.

Safaa Ibrahim, executive director of the San Francisco Bay area chapter of the Council on American-Islamic Relations, said the fire was part of an ongoing campaign to “terrorize” members of the local Muslim community. The mosque had been vandalized several times in recent months – including multiple shots being fired through the windows and walls one night, graffiti scrawled on the walls and a break-in Friday.

Ibrahim said the blaze was apparently started by the burning of religious texts and is the latest attempt to frighten local Muslims. “It’s an act of terror, it’s an act of violence against this community and this mosque,” she said. “They targeted this as an Islamic mosque. They didn’t go to just any other building.”

Emily Hopkins, spokeswoman for the fire protection district, said investigators believe the one-alarm fire was intentionally set and have leads on a possible suspect. However, Hopkins said, there was no evidence that it was a targeted attack against Muslims.