The Council on American-Islamic Relations (CAIR), the nation’s largest Muslim civil rights and advocacy organization, today called on Fox News to sever ties with a contributor who tweeted “Let’s kill them [Muslims] all” in response to yesterday’s deadly Boston Marathon bombings.

CAIR, which issued a call for prayers and blood donations for the victims, says regular Fox News contributor Erik Rush tweeted his “kill them all” comment after being asked, “Are you already blaming Muslims?” He responded, “Yes, they’re evil. Let’s kill them all.” Rush later deleted his tweet, calling it “sarcasm.” In subsequent tweets, he called critics of the “kill” comment “idiots,” “Islamic apologist worms” and “vermin.”

“No media outlet that wishes to be viewed as objective or credible should employ an individual who calls for religious genocide,” said CAIR National Executive Director Nihad Awad . “We urge Fox News to signal its rejection of bigotry and hatred by dropping Mr. Rush from its contributor list.”

He added: “The actions of an individual or individuals – no matter who the culprit is – should never be used to cast racist or bigoted stereotypes on an entire race, ethnicity or religion. Doing so is not only unacceptable in journalism, but unacceptable as Americans.”

Awad noted that Rush has written commentaries attacking the faith of Islam. Last year, he wrote an article, titled “Yes, Islam is an enemy,” arguing that Islam is incompatible with American society. 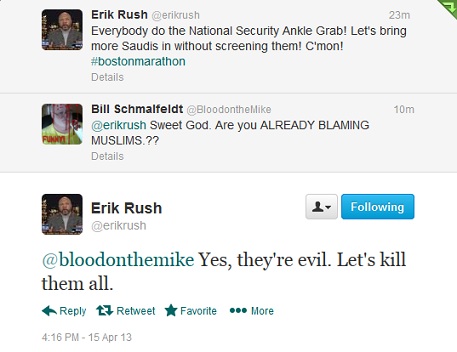