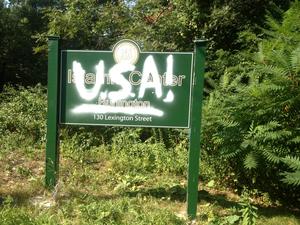 Burlington residents driving down Lexington Street this morning were faced with an upsetting and unsettling sight. It appears someone vandalized the Islamic Center of Burlington’s sign (that is placed at the mosque’s entrance) overnight with white spray paint.