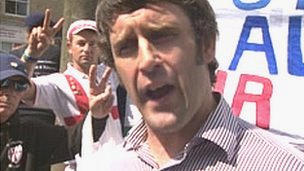 If there were Olympic medals being handed out for political spin then the man who had just introduced himself to me as “Tony Smith” was clearly going for gold.

I was interviewing him against a back drop of largely drunken men waving banners and chanting foul-mouthed racist abuse at a rally organised by the far-right English Defence League in the West Yorkshire town of Keighley.

“Tony”, who admitted he was giving me a false name, had a ready answer when I asked if their language and behaviour was acceptable for a Saturday afternoon political rally in a town where many British Asians live. “That is really unfair,” he told me. “It’s not about race. It’s not about colour. It’s about culture.”