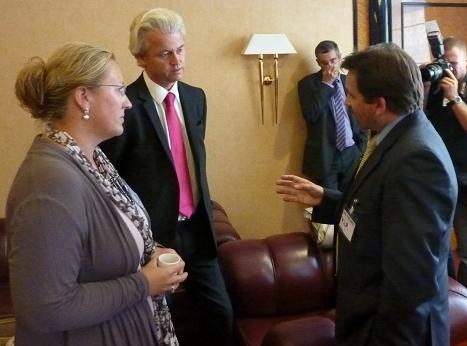 There’s an interview with the British Freedom Party’s chairman Paul Weston at the European Son blog. It doesn’t tell us much we didn’t already know but it’s of interest all the same.

A former member of UKIP, Weston states that he joined that party “because of Lord Pearson, who was the only person to speak about Islam”. He resigned after Nigel Farage replaced Pearson as leader of UKIP: “Mr. Farage has actually come out and said that he will not say anything about Islam because he will no longer be invited on to BBC television programs such Have I Got News for You. I think it’s terrible, so that’s really why I left UKIP.”

This is hardly an accurate summary of Farage’s position – he’s been quite happy to play the anti-Islam card on behalf of his party – but it’s probably true that the current UKIP leader doesn’t entirely share the raving anti-Muslim bigotry of his predecessor, at least as far as his public utterances are concerned. So you can see why Weston became disillusioned and saw the need for a more hardline party that placed Islamophobia at the centre of its programme.

Weston’s characterisation of the BFP is that “we are essentially UKIP but we will talk about Islam”. He sees the party as occupying the same political ground as Geert Wilders’ Partij voor de Vrijheid in the Netherlands and René Stadtkewitz’s Die Freiheit in Germany, which Wilders supports. In choosing the name “Freedom”, Weston says, the BFP is hoping for a connection with those parties that is “more concrete” than just sharing political ideas.

In support of this aim, Weston stresses the supposed ideological differences between the BFP and the British National Party:

“The BNP are still ethno-nationalists. The world has moved on. I don’t think they’re going to get anywhere with that sort of attitude. England, Britain is as it is; you are never going to turn it back to 1950. You can of course say ‘alright, we are going to be a multiracial country but we don’t have to be a multi-cultural country.’ And, of course you can’t have both of those; that’s a recipe for a disaster. Multiracial and British culture; that can work. So that’s the difference between us and the BNP.”

The BFP’s “cultural nationalism” in fact has much in common with the “ethno-nationalism” of the BNP (not least because they have been formulated by Lee Barnes). Both represent an attempt to combine racial theory with an acknowledgment of the primacy of culture.

The concept of ethno-nationalism was used to justify the BNP’s opposition to migrants from Eastern Europe – they may be part of the white race, the argument went, but they are nevertheless alien to British culture. Cultural nationalism holds that a small number of non-white migrants are acceptable so long as they embrace British culture – which allows the BFP to concentrate its attacks on minority communities who it claims don’t assimilate (specifically Muslims) while denying that it is hostile to those who do.

This hasn’t prevented Weston from writing an article entitled “The ethnic cleansing of the English”, which warns that as a result of “mass immigration” the “indigenous race” will be reduced to “ethnic minority status in their homeland within twenty years”. Weston should ask himself whether a party with that sort of attitude is going to prove any more acceptable to voters than the BNP.

The relationship between the BFP and the English Defence League also poses a problem for Weston. It is difficult to see Wilders welcoming links with a political party that is in a permanent alliance with a gang of football hooligans. When the EDL demonstrated in Amsterdam in support of Wilders last year he emphatically dissociated himself from them. More importantly, voters in the UK are unlikely to rally in any large numbers to the BFP when it is publicly identified with an organisation whose members have been repeatedly jailed for acts of harassment and violence, including a recent attempt to blow up a mosque.

It is not surprising, therefore, that Weston is keen to emphasise the informality of the arrangement between the BFP and EDL: “It’s a symbiotic relationship, but there’s no alliance or pact or anything that’s been signed. It’s just a gentlemen’s agreement that we will tacitly, quietly, support each other.” But that is hardly going to solve the problem is it? The BFP is still going to be associated with a mob of drunken thugs.