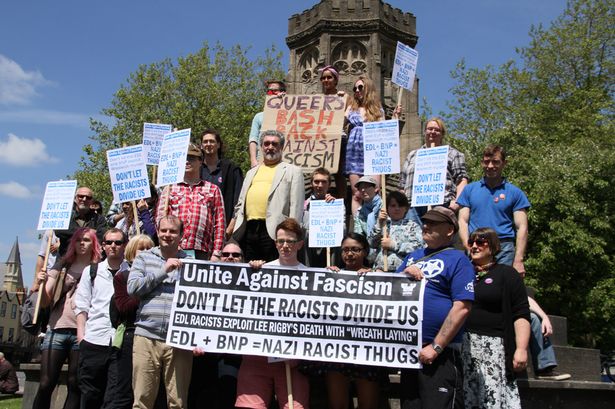 Demos by the British National Party and English Defence League flopped – and a march in London was even outnumbered by a nearby protest against badger culling.

The scenes took place as suspect Michael Adebolajo, 28, was charged with Drummer Rigby’s murder. Michael Adebowale, 22, has already been charged.

Bigots using the atrocity to push a right-wing agenda faced a united front from people shouting slogans like “Fascist scum off our streets” and “we’re black and white and Asian and we’re Jews.”

At one rally not a single EDL supporter turned up.

Apart from a few skirmishes, a BNP demo by just 150 people in Whitehall, Central London, passed without serious incident. BNP leader Nick Griffin moaned: “People who wanted to come have been turned away by the police. People have been attacked by the Far Left gang on their way in, so perhaps that’s cut numbers.”

Drummer Rigby’s family had opposed BNP plans to march in the name of the 25-year-old soldier, who was hacked to death near his barracks in Woolwich, South-east London on May 22. Relatives including his mother Lyn, stepfather Ian, wife Rebecca and son Jack, said: “Lee would not want people to use his name as an excuse to attack others.

“We would not wish other families to go through this harrowing experience and appeal to everyone to keep calm.” Police held 58 anti-fascist protesters for breach of the peace. Meanwhile eight miles away across the capital, worshipers at the Lewisham Islamic Centre – where Lee Rigby murder suspect Adejobajo is said to have prayed – were joined by campaigners and locals in a show of unity.

People from various faiths showed their support. Cafe worker Ismail said: “We want to show we are together and are not scared.”

A planned BNP march from Woolwich to the Lewisham mosque was cancelled. A mosque spokesman said: “The BNP cancelled because of concerns expressed by the communities of both boroughs. The coming together of so many different faiths, races and sections of society to declare, ‘You pick on one of us, then you pick on all of us’ is the real victory”.

Around Britain around 90 EDL rallies took place and turnouts were generally poor. In Exeter, Devon, none of the group’s followers showed up. In Bristol just five EDL protestors showed their faces. In Leeds, West Yorks, 20 EDL members were outnumbered by 30 opponents shouting: “You’re not welcome here.” It was a similar story in Manchester, Oxford and Edinburgh.