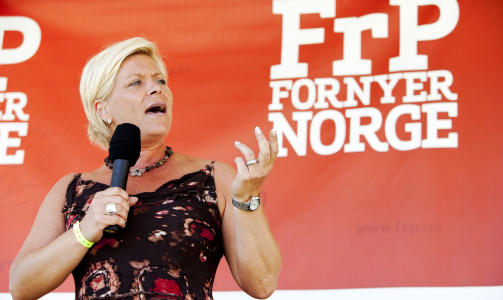 Britain is “giving into the claims of Sharia councils”, according to the leader of Norway’s anti-immigration party which is poised to enter government later this month.

In an interview with The Daily Telegraph, Siv Jensen, the 44-year-old leader of the Progress party who cites Baroness Thatcher as her inspiration, said: “What I have seen that the UK has done is to give in to the claims of sharia councils, and I don’t think we should give into that. In Norway we have one law, and that is the Norwegian law.”

Miss Jensen, who is unmarried, said Britain was suffering the results of earlier mistakes in its immigration policy. “I see some problems arising – You’ve had problems with riots, you’ve had problems with radical groups who aren’t very fond of democratic systems and freedom of speech, and I think those are criteria that you really have to stick to in the modern world.”

Miss Jensen’s party has grown to become Norway’s third largest since it was launched in the 1970s, pushing a libertarian economic and social policy, combined with a vehemently anti-immigrant, anti-Islamic stand.

Ahead of parliamentary elections this Sunday, she could now enter into coalition for the first time with the more centrist Conservatives, who hold a wafer thin poll lead over their rivals Labour. “We are ready to take on the responsibility,” Miss Jensen said.

Miss Jensen has steered her party to recovery since the aftermath of the twin attacks mounted two years ago by far-Right terrorist Anders Breivik, a former party member. The party’s support dropped to 12 per cent but a softening in her rhetoric since the attacks has helped them recover. “Siv Jensen used to talk about ‘the hidden Islamisation of Norway’, and she doesn’t do that any more,” said Martine Aurdal, political editor of the Dagbladet newspaper and Miss Jensen’s biographer.

In recent months the party has published a hard-hitting ‘Immigration sustainability report’, while she has allowed other members of her party a free voice.

Christian Tybring-Gjedde, who leads the party in Oslo, speaks about a cultural war with Islam. “We can’t celebrate Christmas in school, we can’t sing Christmas Carols,” he told the Telegraph. “This is a small part of our culture, which is being washed away gradually, and its very painful. We gave them a home, and now it’s us who are having to adapt to their culture.”

The report recommends the number of non-Western immigrants coming to Norway from close to 20,000 a year to about 1,500 a year. To do this, it recommends renegotiating international refugee treaties, making it more difficult to get citizenship, and curtailing the rights of Norwegian citizens from non-Western countries to bring over their families.

Traditional Islamic marriages would not count as marriages for immigration purposes, while a spouse would need to have studied for seven years after primary school to be eligible to come to Norway, effectively ruling out family reunion with spouses from most Islamic and less developed countries. When asked about the proposal to make Islamic marriages ineligible, Miss Jensen stressed that the report was not yet official party policy.

Miss Jensen rejected any comparison of her party’s ideas on to those of Breivik. “I haven’t really spent much time reading his crazy theories, but what he did was just very awful and he attacked our democracy and I think here, nobody blames us for his actions. That would be absurd.”