A week ago the far-right anti-Muslim group Britain First suffered a major blow when its founder and financier Jim Dowson resigned from the organisation, in part because of his opposition to the notorious “mosque invasions” led by Britain First chairman Paul Golding.

Dowson said that while it was necessary to oppose extremists he objected to “decent Muslims” being intimidated in this way. In a video statement responding to Dowson’s departure, a shaken Golding announced that Britain First had suspended its mosque invasion campaign and would be moving on to other forms of street protest.

It turns out that not much has changed. While actual “invasions” have been renounced, at least temporarily, Britain First is still intent on targeting ordinary Muslims, whose faith it holds to be a threat to the British, Christian way of life.

On Friday, Golding and his gang turned up outside the North West Kent Muslim Association mosque in Crayford. This is the same mosque they barged into last month, harassing the imam and threatening to remove the “sexist” signs outside the building that indicated separate entrances for women and men. This time they didn’t try to enter the mosque but knocked on the door and harangued the people who answered, while handing out copies of Britain First’s Islam and Women pamphlet to worshippers and passers-by. (“Most folk know that Islam exists”, the pamphlet begins, “but have no clue as to its true horror.”)

Britain First activists also turned up at Birmingham Central Mosque on Friday to demand that the imam “speak out against Muslim grooming gangs in the city”. They posed for a photo outside, brandishing a “No more mosques” banner. The same four individuals (who constitute the grandly titled “Britain First West Midlands Brigade”) had earlier visited the Vue cinema in Birmingham’s Star City entertainment complex, which has been the subject of a nonsensical story about non-Muslims being banned from the venue, in order to “confront the manager over his racist ‘Muslims only’ policy”.

On a lighter note, however, Britain First did at least provide us with a laugh when they posted a call for a boycott of Star City on their Facebook page and asked: “Has anyone noticed the crescent moon and star that is used for their logo is also the symbol of Islam?” Perhaps Golding should consider an alternative career as a comedian. 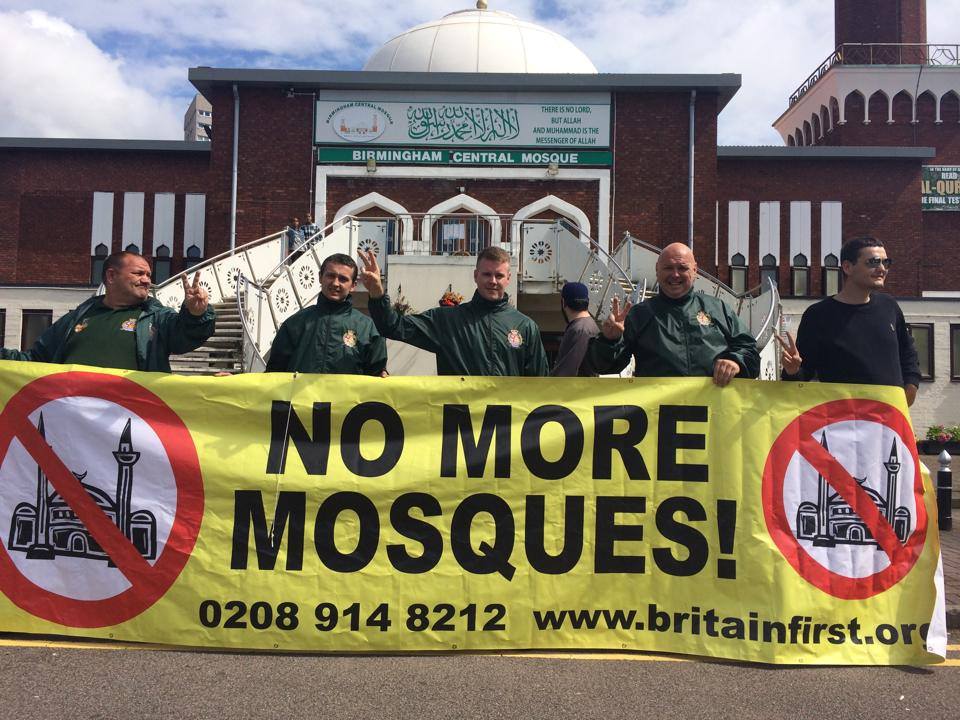