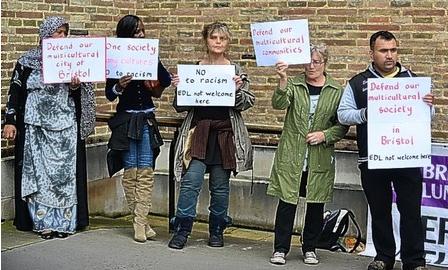 Councillors will not be calling on the Home Secretary to ban the English Defence League from marching through Bristol.

Campaigners gathered at the Council House last night to protest at the far-right group being allowed to stage the event in the city on July 14. About 20 people rallied outside the College Green building ahead of the meeting of the council’s cabinet.

They held placards and banners bearing the words “defend our multicultural city of Bristol” and “No to racism, EDL is not welcome here”. Some chanted slogans against the EDL, which describes itself as an anti-Islamist organisation.

Paulette North, one of the organisers of the rally, was armed with a megaphone during the protest, shouting: “We should be saying the EDL are not welcome here and if they do come they should be concentrated in the open area behind Temple Meads, do whatever they want there and then go home. That’s what Tower Hamlets and Milton Keynes did and that is what we are asking this council to do – but they have done very little and really need to do more.”

A man originally from Iraq, who would give his name only as Esam, was among the protesters. “People in Bristol live like brothers and sisters and we want to live in peace together,” he said. “That is why I am here and I want the government to stop them coming here.”

The protesters then joined the meeting in the council chamber, holding their placards aloft to ensure councillors knew their message.

Adrian Probert, the lead name on an online petition calling for the council to ask Theresa May to ban the EDL march, which has already been signed by more than 2,000 people, spoke in the public session of the cabinet meeting. He called for a ban similar to those imposed in some other cities when the EDL had tried to stage protests in the past.

Mr Probert told the meeting: “Bristol is supposed to be a city of sanctuary and we have people across our communities who are fearful of these people coming in to march in our city – when the EDL march, hate crime goes up.”

Cabinet councillor Gary Hopkins told the protesters that the EDL “are not welcome” in Bristol but that the police had not suggested they would be unable to manage any potential public disorder. He praised the response of Muslim communities for their decision to hold a peace walk in the city the following day, instead of a counter demonstration.

“We think that will be a far more positive way to respond to what happens on the Saturday,” he said. “The last thing I want is these people going into areas that are far more sensitive. I don’t want them coming close to, for example, a mosque.

“If we tried to ban the EDL and we got a ban from the Home Secretary – and there is not the slightest chance of getting that without police recommendation – if we ban this organisation because we don’t like that or agree with their views, the ban would probably be drawn in such a way that it would affect other organisations.”

Earlier this week the Post reported that policing the EDL march is expected to cost about £500,000 and involve 1,000 police officers being drafted into the city. March organiser Mickey Bayliss has toldthe Post he expects about 500 EDL members to take part.