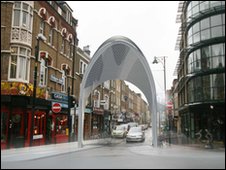 The Guardian of all papers endorses the myth of the “hijab gates” in Brick Lane. Even the Daily Express had the honesty to at least quote the architect, David Gallagher, who was responsible for designing the arches, as saying:

“We were briefed to design something that celebrates the demographic changes of the area. The arches were not designed to look like hijabs. Huguenot and Jewish women wore headscarves. The arches are just modern curves and they will have symbols on them reflecting the different immigrant communities. Having the Star of David on them is one option we have considered, but no decision has been made yet.”

Further update:  The relevant section of the Design and Access Statement can be consulted here.

Another update:  See Lutfur Rahman, “These are not ‘hijab gates’ – they represent the whole community”, Guardian, 26 February 2010