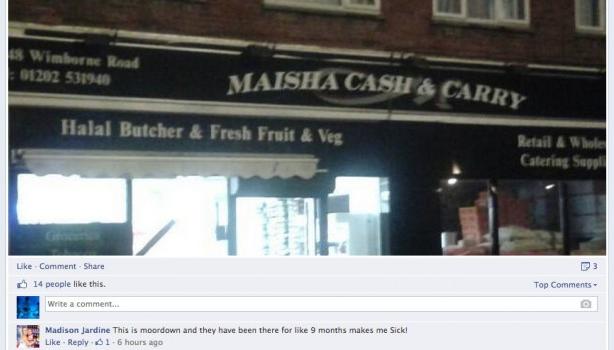 The page administrator states, “We will be sending them a msg that they are not welcome in Bournemouth,” and calls for “peaceful” opposition to the sale of halal meat. Comments below the post included apparent calls for arson. ‘Adrian Staff’ wrote, “Fuck this!!!! Need to torch it….” ‘Mark Fenton’ commented, “burn it out”. Both comments received ‘likes’ from other users.

Shop worker Russell Hamid said they had received no threats, but that several people had offered support. “We have been open for six years, and have never had any issues,” he said. “No one has ever complained and we have regular customers from all parts of the community, not just Muslims. This is a marketing campaign for the EDL.”

The page also features a photo of a woman wearing a hijab on a Yellow Bus. She can be seen attempting to hide her face.

Bob Cox, from the local branch of Unite Against Fascism, said, “The EDL have a history of violence on the streets when they protest. They claim to be peaceful, nice people, but the reality proves to be the opposite. When we campaign against them we always have support from the community.”

The Facebook page administrator did not respond to the allegations.

Bournemouth EDL have reacted angrily to this report, posting a statement on their Facebook page indignantly denying that they advocate violence (“Reading this biased article you’d think the EDL had made threats!”) The statement was issued only a couple of hours after this post appeared on the same Facebook page: 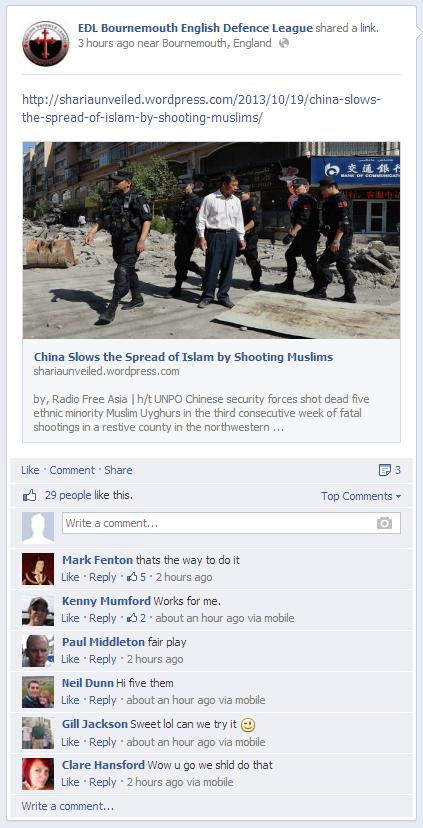