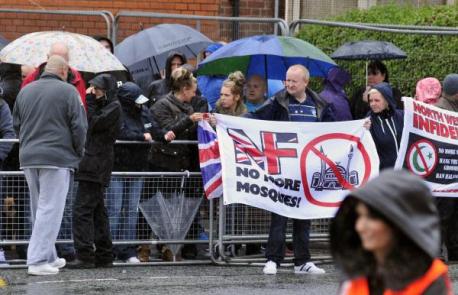 Hundreds of protestors closed off Blackburn Road for more than an hour over protests about the extension of a mosque in Astley Bridge.

The demonstration, organised by far-right organisation the North West Infidels, sparked a second protest by the Bolton Trades Union Council, Bolton Against Racism and members of the local community which was policed by hundreds of officers.

The NWI drafted in supporters from across the UK to object to the extension of the Taiyabah Islamic Centre on disused land off Canning Street. Planning permission was granted in July to create 19 new classrooms as part of the new mosque, which will have a dome and minaret tower.

During the protest bottles, a firework and eggs were thrown at officers, who had been brought in from across the North West to police the protest. Two people were arrested, including one woman who hit an officer in the face.

The opposing protestors were “penned in” on either side of Blackburn Road. They hurled insults at each other, waved banners and chanted outside Wynsors World of Shoes in Blackburn Road.

Fencing was put up around the mosque during the protest, while a police blockade prevented people going down Canning Street. Coaches were used to bring in the NWI demonstrators to prevent clashes between them and the local community.

BNP activist Bryn Morgan addressed the crowds of protestors, urging them not to cause trouble and unite against “the scum”. He refused to speak to The Bolton News.

Chris Chilton, vice chairman of Bolton Against Racism, said that while people may have genuine concerns about the mosque extension, the issue had been hijacked by the NWI and turned into a “racist protest”. He said: “Cultural diversity enriches our lives and doesn’t threaten us. It’s a diverse community, Astley Bridge. I live here and we don’t want it spoiled by these racists coming to our town for their own political ends.”

A Crompton resident, who asked only to be named as Aishah, said the local community were determined to take a stand against the protestors. She said: “They are using the new mosque as a cover for their racism and Islamaphobia, and it’s just not on. This is our town, and we are not going to stand for it. I don’t want our children to go through what our parents went through in the 1970s — this is 2014.” 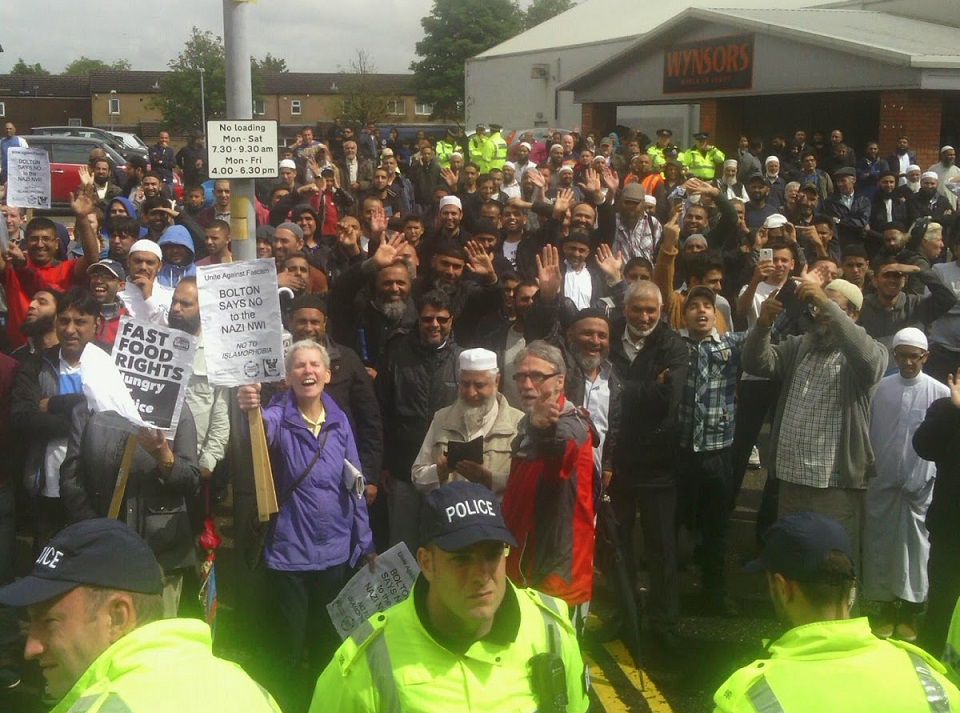 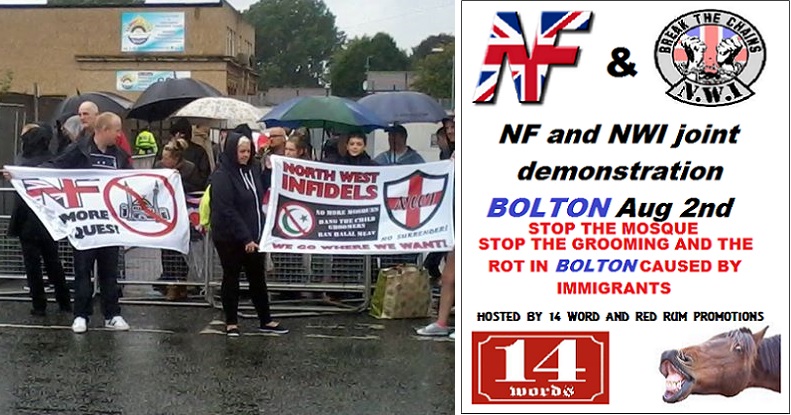 The Stop the Astley Bridge Mosque Bolton campaign is claiming an attendance of 400. While that is no doubt an exaggeration, the demonstration does appear to have succeeded in its objective of uniting various fragments of the far right, at least for the one day:

Update:  It appears that Bryn Morgan is not best pleased with the Bolton News coverage of the day’s events: