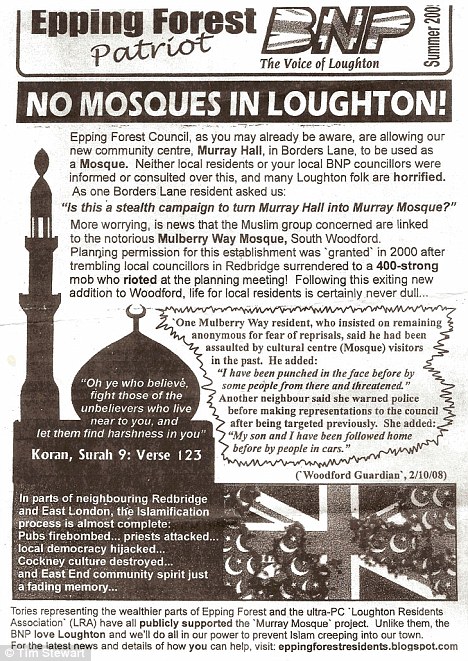 The British National Party has been accused of whipping up racial tensions in the district after it issued an inflammatory leaflet about a local Muslim community group.

In the latest edition of the BNP’s Epping Forest Patriot, delivered to many households in Loughton, the group attack the use on Friday afternoons of the Murray Hall, in Borders Lane, for Islamic prayer sessions. Under a picture of a union flag being eaten away by the Islamic moon and crescent the leaflet says: “In parts of neighbouring Redbridge and east London the Islamification process is almost complete. We’ll do all in our power to prevent Islam creeping into our town.” The leaflet is headed in capital letters: “No mosques in Loughton!”

Noor Ramjanally, of Valley Hill, Loughton, who started the Islamic prayer sessions at the hall has already been subjected to threats and an arson attack, which the BNP deny knowledge of. He said: “I do find it worrying because of my wife and son. We don’t deserve to be going through all this stress, we just want somewhere to pray. It’s just from people who are basically idiots. They don’t know what my religion is about. We have the support of all the community.”

Epping Forest BNP group leader Pat Richardson said she had seen the leaflet and “didn’t disagree with it.” She added: “It shouldn’t be in a community centre and I don’t think it’s appropriate in a BNP ward. It brings all sorts of problems and we don’t want problems in this area.”