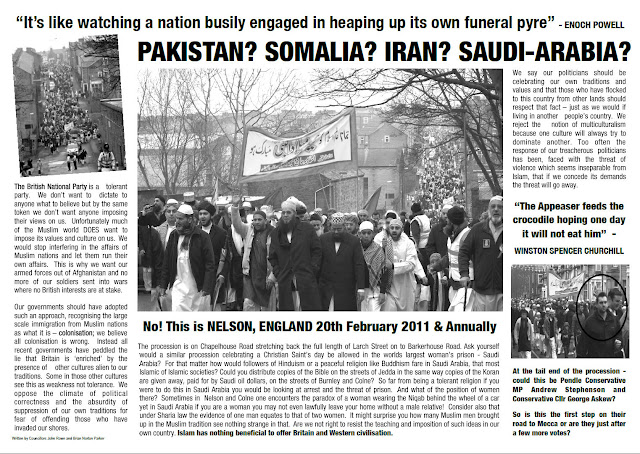 This the sort of campaign literature the British National Party is putting out for next month’s local elections. The leaflet reproduced above is being circulated in Nelson, Lancashire, where the BNP has two representatives on Pendle Council, one of whom – Adam Grant – is up for re-election. His fellow fascist councillor, Brian Parker, has been in trouble before, in 2008 and 2009, over inciting hatred with anti-Muslim flyers.

The leaflet is illustrated with a photo of the annual Mawlid procession in Nelson and demands whether “a similar procession celebrating a Christian Saint’s day” would be allowed in Saudi Arabia. It seems to have escaped the BNP’s attention that until recently the celebration of Mawlid was itself banned by the Saudi authorities on the grounds that it is heretical. But then ignorance is the bedrock of bigotry, isn’t it?