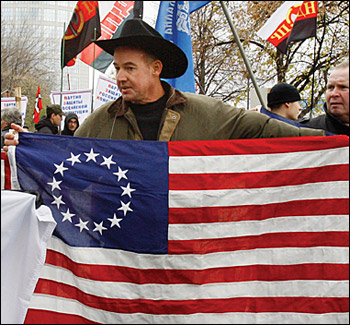 A white supremacist friend of Nick Griffin, the British National Party leader, was banned from entering Britain yesterday as he headed to speak at the BNP’s Red White and Blue festival this weekend.

Preston Wiginton, one of the world’s most active nazis and antisemites, was refused entry by immigration officers at Heathrow airport under laws to keep out “undesirables”. He was to have been the star overseas guest at the BNP’s tenth RWB festival, which opens today in Derbyshire.

It was Wiginton, 44, who organised Griffin’s anti-Islam tour of three US universities at the end of October 2007. As well as financing the trip, Wiginton appealed to users of the Stormfront nazi internet forum to donate money to Griffin while he was in America.