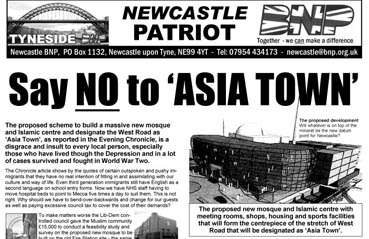 The British National Party in Newcastle-Upon-Tyne has claimed credit for the reversal of a scheme to build a mosque and a development dubbed “Asia Town’ in the west end of that city.

“We fought long and hard against this further destruction of Geordie culture,” said Ken Booth, North East Regional Organiser and tireless BNP campaigner in the city. “The decision by the council to reverse the plans to build the mosque is undoubtedly down to the massive Newcastle BNP’s ‘Say No to Asia Town’ campaign and the second place in Elswick in the May local elections,” he said.