The new report From Voting to Violence? Far Right Extremism in Britain by Matthew Goodwin and Jocelyn Evans can now be viewed online. We reproduce the section of the report examining the views of BNP and UKIP voters on Muslims and Islam.

Attitudes towards Muslims and Islam

What are their attitudes towards Muslims and Islam? At the 2010 general election, the BNP and UKIP pitched to citizens anxious over the role of Islam in society, by pledging to ban the burqa, deport radical preachers and (in the case of the BNP), end immigration from Muslim countries. In our sample, both BNP and UKIP supporters expressed high levels of anxiety over Muslims and the ‘threat’ from their religion, Islam. Over four fifths of BNP supporters in our sample and over three fifths of UKIP supporters would feel ‘bothered a lot’ by the construction of a mosque in their community. On the contrary, less than 1% of our BNP sample and 2% of our UKIP sample would welcome a mosque. As a rough comparator, we include the responses to a similar question asked by the British Social Attitudes survey in 2008, which as we might expect reveals that the BNP, and then UKIP, would feel bothered to a greater extent than average, and are much less indifferent than the population more generally. 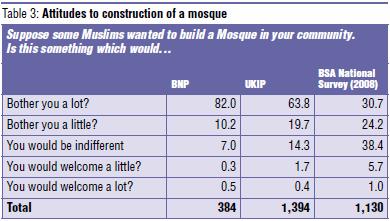 These results would suggest that supporters of the BNP and UKIP are not only deeply concerned about the issue of immigration, but also feel deeply uncomfortable about the perceived threat from Islam, and by extension the presence of its religious institutions at the local level. In short, large majorities in our sample appear absolutely convinced that Islam is threatening Western civilisation.