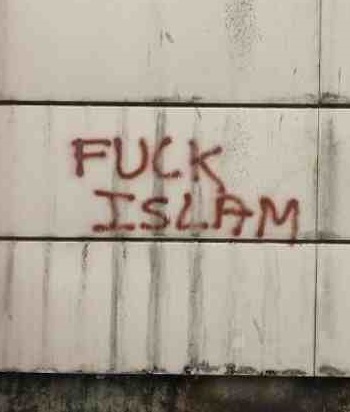 La République du Centre has reported that a skinhead supporter of the far-right group Bloc Identitaire was in court this week charged with criminal damage and incitement to racial discrimination.

On 8 August he sprayed the slogan “Fuck Islam” a dozen times, on public buildings as well as halal butchers and other minority-owned enterprises in Orléans-la-Source. He told the court: “Islam is a dangerous religion, which has caused great harm to our country and our secularism”.

The prosecution is demanding a 3-month suspended prison sentence and the payment of €1,000 in damages, arguing that the graffiti was intended to set communities against each other and inflame tensions.

However, the defence lawyer argued that his client was merely exercising the “freedom to criticise religion”. He told the court: “It is not a question of incitement to hatred but of legitimate hostility to a religion. If he had written ‘Fuck the Pope” or ‘Fuck Christianity’, he would not be here.” He referred to the case of Michel Houellebecq, acquitted of a racial hatred charge after making an abusive statement about Islam, and asked for the release of his client.

The court will issue its judgement on 28 January.