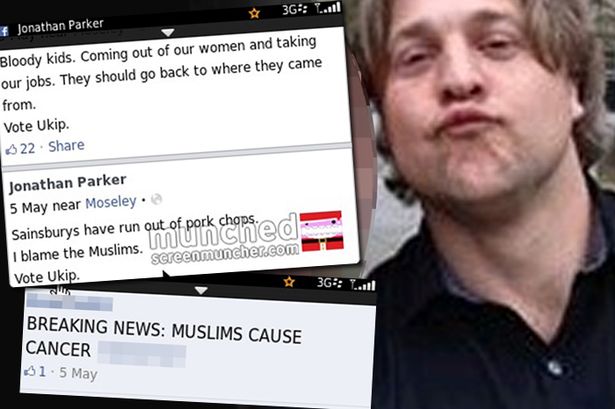 A school teacher has been suspended over allegations he posted ‘racist’ messages on Facebook about Muslims.

Sports instructor Jonathan Parker was sent home from Washwood Heath Academy in Birmingham after an investigation was launched.

It is alleged the teacher wrote messages on social media including one that read, “Muslims cause paedophilia”, and another which said, “Sainsbury have run out of pork chops. I blame the Muslims. Vote UKIP.”

Washwood Heath, one of 21 school at the heart of the Trojan Horse enquiry over claims Muslim hardliners had infiltrated some Birmingham schools, suspended Mr Parker. It is understood he claims the private posts were not genuinely held beliefs and were mockingly racist in tone and aimed at UKIP, the Birmingham Mail reported.

Senior bosses took immediate action after the messages were brought to their attention by concerned pupils attending the 1,400-pupil school which caters for predominantly Muslim children.

Other messages said: “Bloody tax dodging immigrants. If they paid their own way we’d have more money for health, education, public services and pensions. Right I’m off for a STARBUCKS. Vote UKIP.” Another read: “Halal meat used in curry houses up and down the country! Hands off our national dish! Vote UKIP.”

Mr Parker is a middle achievement leader at the privately-run academy having worked there for approximately five years, and one pupil said: “He’s always been a nice teacher. It’s a big shock to us all. Some pupils are very angry.”

Another message on his Facebook account, now all removed, said: “Bloody kids. Coming out of our women and taking our jobs. They should go back to where they came from. Vote UKIP.”

Mr Parker refused to comment last night, but a close friend said: “The messages were to friends only and were satirical, made at the time of the European elections last May, directed against UKIP by sending up the anti-Islamic aspects of their campaign. The posts were gained illegally and doctored to appear out of context and offensive.”

Washwood Heath, whose former pupils include ex-Villa stars Lee Hendrie and Ian Taylor, is still examining the messages, and Mr Parker remains suspended one month into the new academic year. A spokesman from the trustees of Washwood Heath Academy said: “We can confirm that a member of staff has been suspended. Investigations are ongoing and it would be inappropriate to comment further at this stage.”

I’m all for cracking down on genuine Islamophobia, and in the wake of the “Trojan Horse” witch-hunt you can understand why there should be increased sensitivity over such issues at Washwood Heath Academy, but you only have to read Jonathan Parker’s Facebook comments to see that they were indeed intended to mock UKIP’s racism and xenophobia. Hopefully he’ll be quickly reinstated and receive an apology.