Police have launched a probe into a a potential hate crime after an outspoken evangelical pastor defended describing the Islamic faith as “satanic” and a “doctrine spawned in hell”.

Senior Pastor James McConnell made the remarks as he addressed his congregation at the Whitewell Tabernacle Metropolitan Church on Sunday evening. They were described as “very offensive”, “hurtful” and “irresponsible” by a representative from the Belfast Islamic Centre.

There has also been an outcry on social media, with some calling for a police investigation into his comments. One posted: “If this was a Muslim Imam speaking about Christianity, he would be arrested for inciting hatred.”

During his sermon, the clergyman said: “Islam is heathen, Islam is satanic, Islam is a doctrine spawned in hell.” He also likened Muslims to the IRA, saying there were cells spread right across the UK.

When contacted by the Belfast Telegraph last night, the pastor said he stood over his remarks. When asked why he made the comments, he said “because it is against the holy scriptures”. “The Bible says there is one God the father and one Lord Jesus Christ and that is what I believe and that is what Christianity is all about.”

Raied Al-Wazzan from the Belfast Islamic Centre said: “I wonder what knowledge he has about Islam to say all of that. Has he met any Muslims and discussed these things with them? We respect Jesus and Noah and Moses as much as we respect prophet Mohammed. And you will never find any Muslim who will say any bad words about Jesus.

“I would like to invite him to a debate to see the Muslim point of view. Maybe he has been affected by the media these days because there is a lot of bad reports about Muslims and linking that with terrorism – he is mixing some of the political issues here with religion. I’m aware there are some Muslims using Islam for the sake of political view – but that doesn’t mean all Muslims approve of that.”

Against the backdrop of the recent surge of hate and racial crimes across Northern Ireland, Pastor McConnell denied that his comments were “irresponsible”. He said: “I do not teach my people to have hate policies or to go and hurt people – definitely not.”

Also in his sermon, the minister told his congregation: “Now people say there are good Muslims in Britain – that may be so – but I don’t trust them.”

Pastor McConnell said people had said they were pleased he had “stood up for the Christian faith”.

“The bible talks about the doctrines of devils and the bible also says that the devil can appear as an angel of light – he’s not a person with horns and a big tail. The devil is a fantastic looking creature. He was the anointed cherub and he was cast out of heaven. These people are believing in doctrines of devils.”

Whitewell Church was founded in 1957 and started with just 10 people – it has now increased to a capacity of more than 2,500. Pastor McConnell’s congregation has included politicians like Peter and Iris Robinson, Sammy Wilson, and leading figures from the world of sport.

The Muslim religion was created many hundreds of years after Christ. Mohammed the Islam prophet was born around the year AD 570 but Muslims believe that Islam is the true religion dating back to Adam and that the biblical patriarchs were all Muslims including Noah and Abraham and Moses and even our Lord Jesus Christ.

Today we see powerful evidence that more and more of Muslims are putting the Qur’an’s hatred of Christians and Jews alike in to practice.

Now people say there are good Muslims in Britain — that may be so — but I don’t trust them.

Enoch Powell was right and he lost his career because of it.

Enoch Powell was a prophet and he told us that blood would flow in the streets and it has happened.

Fifteen years ago Britain was concerned of IRA cells.

Right throughout the nation they done a deal with the IRA because they were frightened of being bombed.

Today a new evil has arisen — there are cells of Muslims right throughout Britain — can I hear an amen? [congregation amen]

Right throughout Britain and this nation is going to enter into a great tribulation and a great trial.

To judge by some of what I have heard in the past few months, you would think that Islam was little more than a variation of Christianity and Judaism.

That so, Islam’s ideas about God, about humanity, about salvation are vastly different from the teaching of the holy scriptures.

Islam is heathen, Islam is satanic, Islam is a doctrine spawned in hell.

Postscript:  It’s a significant anomaly that in Northern Ireland, unlike England and Wales, there has long been a law against inciting religious hatred – under the Prevention of Incitement to Hatred Act (Northern Ireland) 1970, strengthened by the Public Order (Northern Ireland) Order 1987 – which has real teeth. So there’s no reason why McConnell can’t be charged with incitement, with a real prospect of securing a conviction. If he is, that will be a good argument in favour of amending the utterly useless Racial and Religious Hatred Act 2006 so the Muslim community in England and Wales have the same legal protection that they do in Northern Ireland. 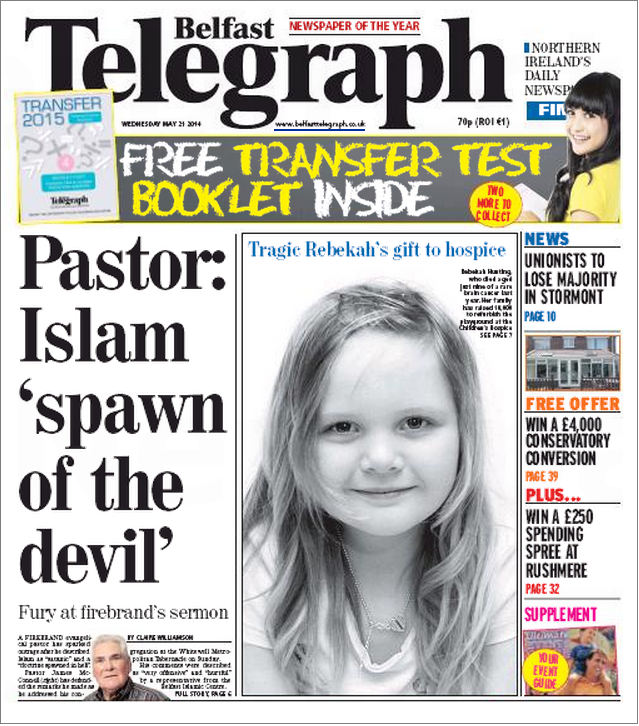