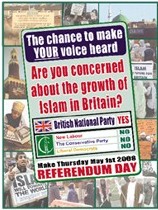 Today the BNP urged its supporters to cast a second preference vote for Boris Johnson in the London mayoral election. The fascists explained that “a second choice vote for him gives you the chance to vote BNP as your first preference and still vote to get Livingstone out of office”. The replacement of Livingstone by Johnson would, the BNP opined, “be an improvement for the majority of Londoners”.

You can see why the fascists might favour Boris Johnson. When it comes to Islamophobia – and the BNP are urging voters to make Thursday May 1st a referendum on Islam – they find much common ground with the Tory mayoral candidate.

Here are a few of Johnson’s thoughts on the subject of Islam and Muslims….

“To any non-Muslim reader of the Koran, Islamophobia – fear of Islam – seems a natural reaction, and, indeed, exactly what that text is intended to provoke. Judged purely on its scripture – to say nothing of what is preached in the mosques – it is the most viciously sectarian of all religions in its heartlessness towards unbelievers. As the killer of Theo Van Gogh told his victim’s mother this week in a Dutch courtroom, he could not care for her, could not sympathise, because she was not a Muslim.

“The trouble with this disgusting arrogance and condescension is that it is widely supported in Koranic texts, and we look in vain for the enlightened Islamic teachers and preachers who will begin the process of reform. What is going on in these mosques and madrasas? When is someone going to get 18th century on Islam’s mediaeval ass?” (Spectator, 16 July 2005)

“… it is no use the Muslim Council of Great Britain endlessly saying that ‘the problem is not Islam’, when it is blindingly obvious that in far too many mosques you can find sermons of hate, and literature glorifying 9/11 and vilifying Jews.” (Daily Telegraph, 14 July 2005)

“The Islamicists last week horribly and irrefutably asserted the supreme importance of that faith, overriding all worldly considerations, and it will take a huge effort of courage and skill to win round the many thousands of British Muslims who are in a similar state of alienation, and to make them see that their faith must be compatible with British values and with loyalty to Britain. That means disposing of the first taboo, and accepting that the problem is Islam. Islam is the problem.” (Spectator, 16 July 2005)

“The proposed ban on incitement to ‘religious hatred’ makes no sense unless it involves a ban on the Koran itself…. Militant Islam has been shielded from proper discussion by cowardice, political correctness and a racist assumption that we should privilege the beliefs of a minority, even when they appear to be mediaeval.” (Daily Telegraph, 21 July 2005)

The Trouble with Islam

“What makes modern Islam so politically troublesome is that some Muslims can be induced to take offence not just at an insult to Islam, but at any injustice suffered by one of their co-religionists, and it is this deep personal sense of outrage – scarcely explicable to our post-enlightenment souls – that helps the whacko imams to warp the alienated young men into becoming suicide bombers….” (Daily Telegraph, 21 July 2005)

Invasion of Afghanistan and the ‘Clash of Civilisations‘

“Messrs Bush and Blair have a nightmarish diplomatic battle on their hands to persuade the Muslims that this is simply a response to terror. That task is made infinitely more difficult by the unsayable truth, which any student of the Koran will recognise: that this is, to some extent, a clash of civilisations. It is a crunching of cultural tectonic plates that has been going on, intermittently, since Mohammed’s followers warred with Charlemagne.” (Daily Telegraph, 18 October 2001)

Iraq and the ‘War on Terror’

“To the paranoid Muslim mind, the evident bogusness of the ‘war on terror’ – in so far as it applied to Iraq – suggested that the war was really about something else: about oil, about humiliating and dominating the Islamic world…. To keep talking of war plays on militant Muslim paranoia, and, incidentally, since it is a key point of Islamic theology that the suicide bomber may not be called a martyr, and therefore entitled to his ration of virgins/raisins, unless he dies in ‘war’, we are by our own vocabulary offering these people an incitement to murder.” (Spectator, 16 July 2005)

“I looked at all those Labour members, gibbering and hooting like a bunch of flea-ridden gibbons, taunting Nicholas Soames and other Tories brave enough to stick up for an ancient way of life. Would they dare to attack halal? Would any of them, in their largely urban seats, with their sizeable Muslim minorities, ever have the guts to denounce Islamic ritual slaughter? Like hell they would.” (Daily Telegraph, 5 December 2002)

“As Theodore Dalrymple pointed out in last week’s Spectator … young Muslim girls are routinely taken out of school, before the age prescribed by law; they are taken off to Pakistan and obliged to marry men they have no wish to marry. Does it show a pleasing multicultural tolerance, that we allow this to go on? … As W F Deedes has recently pointed out, multiculturalism is the wretched consequence of Enoch Powell. After his inflammatory 1968 speech, it became almost impossible to talk about immigration.” (Daily Telegraph, 1 November 2001)

“… too many Britons have absolutely no sense of allegiance to this country or its institutions. It is a cultural calamity that will take decades to reverse, and we must begin now with what I call in this morning’s Spectator the re-Britannification of Britain. That means insisting, in a way that is cheery and polite, on certain values that we identify as British. If that means the end of spouting hate in mosques, and treating women as second-class citizens, then so be it. We need to acculturate the second-generation Muslim communities to our way of life.” (Daily Telegraph, 14 July 2005)

“We’ve all got to be as British as Carry On films and scotch eggs and falling over on the beach while trying to change into your swimming trunks with a towel on. We should all feel the same mysterious pang at the sight of the Queen. We do indeed need to inculcate this Britishness, especially into young Muslims…. We should teach British history. We should think again about the jilbab, with the signals of apartness that it sends out, and we should probably scrap faith schools. We should forbid the imams from preaching sermons in anything but English; because if you want to build a society where everyone feels included, and where everyone shares in the national story, we cannot continue with the multicultural apartheid.” (Daily Telegraph, 4 August 2005)

“… here is how John Reid could prove that he was really tough. Here is the bravest thing he could possibly say. He should say that the real problem in our society, and the reason we have so many disaffected and alienated Muslim youths, is that for a generation he and people like him supported the disastrous multicultural agenda. The reason that 40 per cent of British Muslims would like some form of Sharia law in this country is that the Left has traditionally deprecated British institutions and even the teaching of English. A truly brave John Reid would now publicly grovel to Ray Honeyford, the Bradford head who called for teaching in English and who was vilified and persecuted by the Left.” (Daily Telegraph, 16 November 2006)

[Note:  In a notorious article published in the Salisbury Review in 1984 Honeyford claimed to expose “the real educational consequences of the general acceptance of the notion that multi-racial inner cities are not only inevitable but, in some sense, desirable”. Reporting on a meeting with Bradford Asian parents at his school, he wrote: “The hysterical political temperament of the Indian sub-continent became evident – an extraordinary sight in an English School Hall.” Honeyford denounced as “totalitarian” the proposals that “schoolbooks with a racist content should be scrapped” and that “racist teachers should be dismissed”. This is the man Johnson hails as a hero.]

“… he worries about schools that, without proper regulation, might encourage divisions between communities. He does not mean Jewish ones. ‘It’s pretty obvious what I’m talking about,’ he says, rather gruffly. Indeed it is. ‘I do worry there are some communities, where faith schools that aren’t properly regulated and controlled could be places that encourage more division…’.” (Jewish Chronicle, 6 September 2007)

“This ludicrous and lamentable case had nothing to do with ‘modesty’. I don’t believe she wore the jilbab to ‘regain control of her body’…. This case wasn’t even about religion, or conscience, or the dictates of faith. At least it wasn’t primarily about those things. It was about power. It was about who really runs the schools in this country, and about how far militant Islam could go in bullying the poor, cowed, gelatinous and mentally spongiform apparatus of the British state.

“… the Court of Appeal was quite wrong in its assessment of Shabina’s human rights. Yes, she has the right to freedom of religion, but she could not manifest that freedom in such a way as to prejudice the school’s ability to ensure discipline and order, and to run things in the way it wanted. Even in Strasbourg, home of the European Court of Human Rights, there is a long-standing tradition of upholding the discretion of educational establishments in matters of dress not least in several important cases defending the right of Turkish universities to ban headscarves.

“How could the Court of Appeal have missed this? Is it really possible that British appeal court judges have less robust common sense than the judges of Strasbourg? Or is it also that our judges suffer, like other parts of the British Establishment, from a certain leeriness and timorousness about Islam?…

“All around us, in our courts, in the oppressive liberty-destroying Bills being rushed through Parliament, we see the disasters of multiculturalism, the system by which too many Muslims have been allowed to grow up in this country with no sense of loyalty to its institutions, and with a sense of complete apartness.

“In rejecting Shabina’s case, the Law Lords have provided a small but important victory for good sense, for British cohesion, and for the right of teachers to run their own schools.”

“I can think of plenty of things for which I would like Newtzilla to apologise … his cheerleading for anti-Semitic Muslim clerics such as al-Qaradawi, who supports suicide bombers and the beating of women.” (Daily Telegraph, 17 February 2005)

Local Control of the NHS

“… you could imagine in a totally devolved system that Islamic zealots might take control of some inner-city area”. (Daily Telegraph, 5 October 2006)

Israel and the War on Lebanon

“Israel provides a focus for the resentment of a Muslim civilisation that finds itself materially and intellectually humiliated by the achievements of America and the West…. Whatever the hideous shambles of the past few days, it is still true, in principle, that when Israeli rockets kill civilians, they have missed their targets, and that when Hizbollah rockets kill civilians, they have scored a deliberate hit.” (Daily Telegraph, 3 August 2006)

Cracking Down on Islam

“Whatever you say about the Russians, they have no qualms when it comes to abusing human rights, if that means cracking down on Islam.” (Spectator, 2 September 2005)