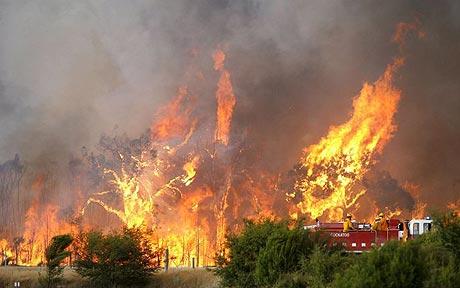 Firefighters and homeowners aren’t the only ones keenly watching Australia’s massive wildfires, responsible for killing at least 173 people in the southern part of the continent. Terrorism experts suspect Muslim extremists are watching closely, too – and taking note of the devastation.

While Australian authorities have revealed no evidence linking the wildfires to extremists, terrorism experts say the large death toll, the huge swath of destruction and the massive financial blow to the country are proving to Islamic terrorists that arson can be a highly effective – and simple – tool of holy war.

“Could [militants] do this? Yes,” said Steve Emerson, executive director of The Investigative Project on Terrorism. Perhaps more troubling, Emerson said, is that there is very little authorities can do to prevent terrorists from setting deadly wildfires. “It would be absolutely impossible to protect against,” he said. “Airport parameters are hard enough to protect. Imagine trying to protect something 100,000 times as big.”

If extremists did have had a hand in the wildfires, Emerson said, it would be “very disturbing”. “It would indicate a new area of jihadist attacks, that is, attacking natural resources,” he said. “And given the devastation of these fires, it certainly could instill new terror ideas in other areas like the food supply chain or in the environmental realm.”

Yes, that would be the same Steve Emerson who told CBS News in 1995 that the Oklahoma City bombing showed “a Middle Eastern trait” because it “was done with the intent to inflict as many casualties as possible”.

Meanwhile, here in the UK, the fascists of the BNP pose the question: “Australian death fire: was it jihad?”