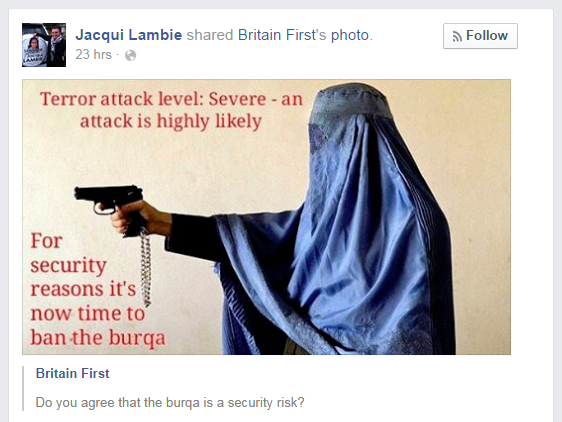 PUP senator Jacqui Lambie has posted online a provocative photo of a person wearing a burqua about to fire a gun, as Muslim leaders have warned “inflammatory” comments from her and Liberal senator Cory Bernardi are assisting Islamic State recruit potential terrorists.

The caption on the picture, created by far-right political group Britain First, states that “For security reasons it’s now time to ban the burqa”. Britain First’s mission statement describes it as a “street defence organisation” that wants “our people to come first, before foreigners, asylum seekers or migrants”.

Senator Lambie’s post had hundreds of likes and comments on Friday, 14 hours after it was first shared on her Facebook page, and represents a step up of her controversial campaign to ban the burqa.

Senator Bernardi on Thursday renewed his call to ban the burqa under the cover of the anti-terror raids, while Senator Lambie’s has, in addition to a burqa ban, called for adherents of sharia to “pack their bags “and get out of Australia. The Tasmanian Senator has also proposed stripping Muslims of welfare entitlements if they continue to support Sharia law.

Muslim elders have rebuked senators Lambie and Bernardi, claiming the pair had “hurt” both Muslim and non-Muslim communities.

Dr Jamal Rifi, a Lebanese community leader from Lakemba, said: “These people are betraying the Australian public. They are on the side of the barbaric state and the side of extremists. Political leaders should be leading, cooling the situation not inflaming it.”

Keysar Trad, spokesman for the Islamic Friendship Association of Australia, said the maverick senators had actually benefited the Islamic State, also known as ISIL and ISIS, in its intention to not only recruit fighters in Australia but strike at Australian society through terrorist plots like the foiled bid to carry out a public beheading.

He said a great concern of the Muslim community is that senators Bernardi and Lambie might defect from their political parties – the Liberals and Palmer United, respectively – and join together to become a reactionary force in Parliament similar to Pauline Hanson.

“People like Cory Bernardi and Jacqui Lambie, without realising what they are doing, are contributing to ISIS and boosting its recruitment drive,” Mr Trad said.

“In their opportunistic search for votes they are handing over our freedoms to ISIS, our fears to ISIS. Through sheer opportunism they have basically giving ISIS a win. The division that came out of yesterday was the greatest gift our country could hand ISIS.”

Mr Trad said Muslims were thankful that Prime Minister Tony Abbott had distanced himself from Senator Bernardi’s comments that there were “burqa-wearers” in the houses raided by police in Sydney and Brisbane. “This shroud of oppression and flag of fundamentalism is not right in Aust,” he tweeted.

As revealed by Fairfax Media on Wednesday, Clive Palmer has been quietly trying to hose down Ms Lambie’s comments on sharia.

The leader of PUP has been warned of a potential electoral backlash and has sought to appease Muslim leaders. He has sent a string of text messages to Mr Trad to assure him that Senator Lambie’s stance on sharia – which includes stripping supporters of the right to vote and claim welfare – are not party policy.

The flare-up has renewed focus on speculation that Senator Lambie will split from the PUP.

On Friday, Mr Abbott renewed his call for social unity.

“I certainly don’t want to isolate any community. I want to wrap up the extended family of the Australian nation in an embrace. That’s what I want to do because we are all in this together and frankly we would all be the victims of any terrorist attack here in Australia and that’s why it’s so absolutely important that we do whatever we can to prevent it from happening,” he said.

Mr Trad said the Muslim community in Sydney had felt “battered” when it learned of the raids.

“We don’t want anyone to be hurt in the name of our religion,” he said.

Senator Cory Bernardi rejected criticisms from Mr Trad saying “in my opinion he shouldn’t be speaking for any community in this country”.

Opposition Leader Bill Shorten has asked Mr Abbott to rebuke Senator Bernardi over the comments, but the Prime Minister has not yet said if the backbencher would be disciplined.

Attorney-General George Brandis responded to Senator Bernardi’s comments on Friday, saying he had long held his views on the burqua and although it was not the government’s position, he would not be asked to keep those views to himself.

“Senator Bernardi is a member of Parliament, he has views and like all members of Parliament he’s entitled to express his views, but his views are not the views of the government,” he told the ABC.

And “Leaders plead for tolerance, amid signs of Muslim backlash”, The Australian, 19 September 2014

Update 2:  It would appear that Lambie’s support for the far right is enthusiastically reciprocated: 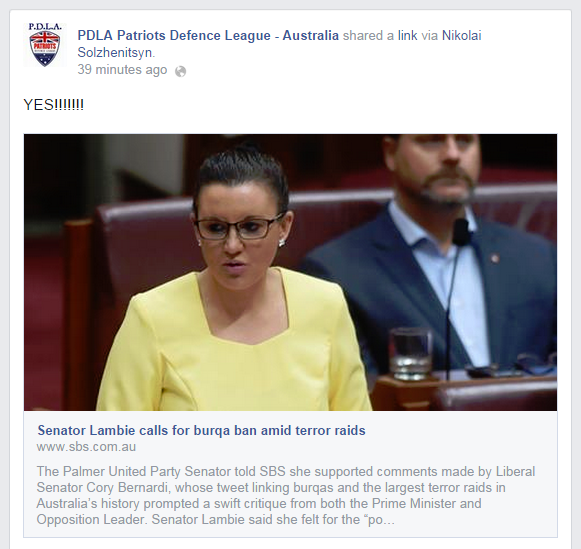