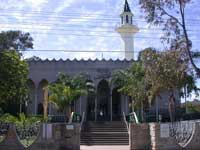 Police have been asked to protect Australia’s largest mosque next weekend because of concerns that a bikini march staged to coincide with the anniversary of the Cronulla riots may get out of control.

The caretaker of Lakemba Mosque, the Lebanese Muslim Association, says it is taking no risks, requesting at least 32 police officers to protect the place of worship on Saturday and Sunday. Association president Tom Zreik said he met police on several occasions to ensure there would be adequate numbers of officers present to defuse problems and arrest troublemakers.

“We are treating this as something that is funny and hilarious but also taking precautions,” Mr Zreika said of the bikini march. “Some people may see this as provocation and the last thing that we want is to see anyone being attacked.”

The organiser, Melbourne grandmother Christine Hawkins, has asked women nationally to dress in bikinis and colourful beachwear and rally outside large mosques to show their disgust at comments by leading Muslim cleric, Sheik Taj el-Din al Hilaly, who likened women to “uncovered meat”. A white supremacist website has promoted the march.

Members of Sydney’s Muslim community began raising their concerns last week, with hundreds joining an internet discussion to find a “peaceful avenue” to protect their mosque.