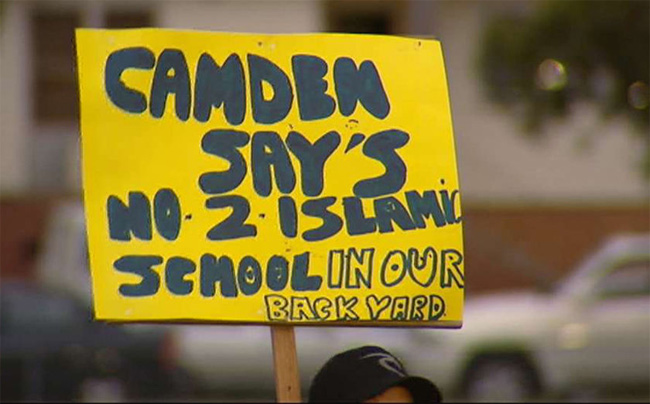 Four Christian churches have joined in an unprecedented attack on the Islamic faith in an attempt to stop a Muslim school being built.

Calling the religion an ideology driven by world domination, a submission to the Land and Environment Court yesterday said a proposed school at Camden was a “beachhead” in Islamic takeover of southwestern Sydney, threatening the Australian way of life.

The attack, co-signed by local heads of Baptist, Anglican, Presbyterian and the Evangelical Sisters of Mary churches, formed the spearhead of Camden City Council’s defence to a court challenge over its rejection of a development application for the Muslim school.

“Islam is not simply a private religion. It is driven by a powerful political agenda, it is an ideology with a plan for world domination,” the letter said. “The Quranic Society application to establish an Islamic school in Camden is typical of a regularly repeated pattern to form a beachhead in an area for the development of a sub-culture which, for the most part, regards its own legal system as superior to the current Australian law.”

They said the Muslim community would seek to dominate public space in Camden “as we have seen in Auburn, Bankstown, Lakemba and more recently Liverpool”.

Use of the letter is a turnaround from previous claims that the council’s ruling was on the grounds of traffic congestion.

The first day in the society’s court challenge began with a visit to the proposed site on Cawdor Rd, Camden. Chris Gough, heading the Quranic Society’s legal team, said there were no planning grounds why the school, for 900 students, should not be approved. “The constitution of Australia talks about freedom of religion,” Mr Gough said.

In their objection, the Christian ministries said they may be seen as racists or hypocrites but they were trying to preserve a rich, hard-won way of life that was incompatible with Quranic Society teachings.

“The Quranic Society espouses a world view which is not compatible with broader, Australian egalitarian culture,” they said. “A fundamental tenet of the faith is that Muslims are not required to obey any law that does not come from Allah.”